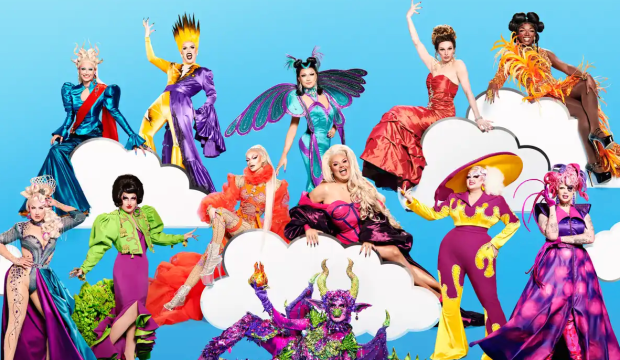 Hopefully you met the queens of “RuPaul’s Drag Race UK” season 3 already because the premiere is upon us! That’s right, it’s our third trip across the pond to find out which queen of the United Kingdom is ready to join the monarchy. RuPaul Charles is back again to host alongside her longtime friend and collaborator Michelle Visage. They’re joined on the panel throughout the season by entertainment legends Alan Carr and Graham Norton, as well as a collection of guest judges scattered about.

Read below for our recap of episode 1 to find out what happens when the girls are asked to represent their hometown in one runway look and get inspired by their favorite thing in another:

Well, it wouldn’t be Drag Race if we didn’t start the season with the parade of entrances by the new crop of queens. The first to enter was rightly Veronica Green, back from her half-season stint on season 2 and greener than ever. No, literally, her face is green. As expected she says she has “unfinished business” to settle and wants to prove that she deserves her return spot. Veronica’s all green look paired nicely with the all pink look that pop queen Kitty Scott-Claus entered with. Kitty is in the same Drag Girls Aloud group that Cheryl Hole is in so she knows exactly what she’s getting herself into. River Medway was next, the queen who named herself after a river because they’re both “full of sh*t.” Fourth to enter was Scarlett Harlett who describes herself as part Marilyn Monroe and part slag.

Entering next with more attitude than the other girls could stomach was Vanity Milan, promising to perform the house down every chance she gets. She was followed by Ella Vaday, the self-proclaimed “drag beast of the East” and a clear reference queen to Alyssa Edwards. Veronica was slightly threatened by the entrance of Ella because she, too, is a theater queen. Choriza May broke Veronica’s tension with her entrance and explained that she’s five years new to England by way of her homeland Spain. Everyone was gagged by Victoria Scone‘s entrance, knowing immediately that it was history being made as the first cisgender (or as they say in the UK, “AFAB” – assigned female at birth) queen entered the Werk Room.

Elektra Fence came next and explained that her name comes from a viral video of her touching an electric fence and slipping into cow sh*t once. Anubis calls herself a triple threat in drag and entered as one of the youngest queens ever at age 19. The other 19 year old, Krystal Versace, followed her in as a look queen, prompting the other girls to ask if she’s “an Instagram queen” which she immediately shot down. Last to enter was Charity Kase, the “demonic, demure and delusional” queen with blood and skin hanging down from her mouth.

Before the girls could properly settle in, Ru arrived to welcome them to the competition and present them with their first challenge, a game of dirty charades. In the first group of Kitty, Choriza, Ella and Scarlett, Kitty struggled to get the girls to guess “Judge Booty” because they couldn’t figure out why she was pointing at her butt, but once she started hammering for “judge” Choriza got it right away. They also correctly guessed “Blue Balls Drag Race,” “Brave Shart” and “Raiders of the Last Arse.” The second group was made up of River, Vanity, Elektra and Veronica who got “The Sperminator” “Oklahomo” and “Sleeping with the Enema” quickly, but it took a lot of work for them to guess “The Curious Case of Benjamin Bumhole” from Veronica’s clues. And the third group of Anubis, Charity, Krystal and Victoria was on fire with their quick guesses of “Robocock,” “Tits a Wonderful Life,” “Mary Poopins,” and “A Tale of Two Titties.” Ultimately the challenge was about making Ru laugh, which they all did and so there was no winner.

Instead, Ru turned the girls’ sights toward their first runway presentation, a two-look serve that would be their first maxi challenge. One of the looks should be the “Queen of Your Hometown” garment and the second should be inspired by one of their favorite things. As the girls settled in to their new surroundings, they also pressed each other with the most urgent of questions. You know, like how does Veronica feel being back, does Victoria mind being around all the men undressing (no, she clearly doesn’t as a drag queen) and how much plastic surgery has 19 year old Krystal already had? River also got a chance to open up to Vanity about how her mom passed away from Covid only two weeks before she got the call to join the show. River’s mom was an important influence and supporter of her drag so being on the show now is doubly meaningful for her.

With two runways to prepare for there was not much time for slacking off, so the queens quickly got to painting their faces and assembling pads and tucks. Joining Ru on the panel tonight was series regulars Michelle and Graham, and this week’s special guest star Matt Lucas. The first set of looks they gazed upon were the hometown ones. Victoria opened as a giant daffodil from Cardiff, followed by Kitty as a chocolate-eating queen from Birmingham, Ella as a women’s rights activist from Dagenham, Anubis inspired by a helter skelter from Brighton, River as a statue with a traffic cone on its head from Medway, Krystal as a garden of eden princess from Kent, Veronica in cotton balls from Rochdale, Scarlett in a black gown with white pearls from East London, Elektra as a coal miner from Burnley, Vanity in Jamaican flag inspired clothes from South London, Choriza in the black and white of footballers from Newcastle, and Charity as a full-on rose from Lancashire.

The second looks were in the category “My Favorite Things.” Victoria was inspired by afternoon tea and she resembled the whole tiered platter. Kitty was inspired by ABBA in Swedish pop star looks from the 70s, Ella was inspired by the Pride Progress Flag to represent inclusivity, and Anubis was inspired by sea creatures in a squid wig and a net dress. River turned the corner in musical note fabric to represent music, Krystal went with cheetah print to represent cats, Veronica was in a shiny jumpsuit to represent video games, and Scarlett went with a headphone street look also to represent music. Elektra’s favorite thing, her birthday, came out as a toddler girl costume, Vanity gave a shout out to Estonia where her husband is from, Choriza went bright in an artsy look because she loves art, and Charity closed the show in horror makeup again to represent freak shows.

Based on the two presentations, Ru singled out the week’s tops and bottoms so that each could receive a critique from the judges. First up was Victoria who was lauded by Michelle for her “big presentation” and by all of them for “breaking ground” on the show in a way that, as Ru says, no one else has. Anubis took a hit for her sea creature look which Michelle called basic and Matt noted that her prettiness didn’t come through. Graham told River that she managed to make the runway fun by not doing a traditional walk for the hometown, but none of the judges understood how her second look represented music very well. Krystal got high marks for looking flawless in both shows and underscoring that she’s a fashion queen. Scarlett earned compliments for actually representing music in her second look and Graham praised her for exhibiting different energy in the two looks. Michelle and Graham both thought that Elektra could have gone bigger for the miner look, like she did for her toddler birthday look.

Backstage the safe queens were half-relieved and half-disappointed that looks they thought were strong didn’t leave a stronger impression with the judges. When the other girls returned, Charity and Kitty gave Scarlett beef for making the top when they thought that other queens put more effort into their looks. But ultimately they all had to realize that while they may have not clocked some of the girls as threats, they are all threats and any of them can land in the top or bottom at any time.

Back on stage, Ru revealed to the queens that the bottom two queens would lip sync for their life and for the first time in Drag Race herstory the top two queens would also lip sync for the win. Up first was the top two queens, Victoria vs. Krystal, in a battle to Bonnie Tyler’s ” Total Eclipse of the Heart.” The “turn around” refrains really worked in Victoria’s favor since she was dressed as the serving platters for Sunday tea because she had props to work with and a story to tell, but Krystal’s passionate portrayal of the lyrics won Ru over instead and so she was declared the winner for the week.

As for the bottom queens, Ru decided that River was safe, leaving Anubis to go head to head with Elektra to “Sweet Melody” by Little Mix. Both queens handled the uptempo song with high-movement performances, but Elektra left everything on the floor with hard-hitting choreography that the judges couldn’t turn away from. There was no doubt that Elektra won out in this battle, meaning Anubis must be the first to sashay away.