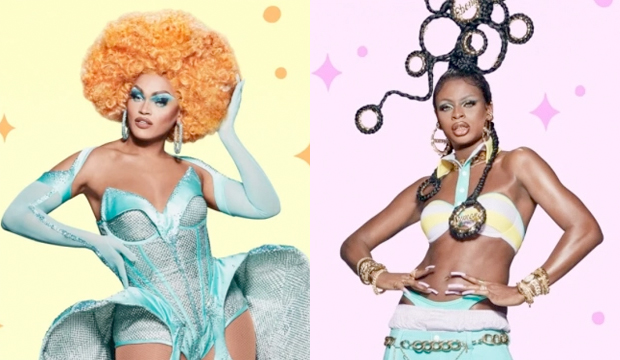 Buoyed by her two maxi challenge victories, Symone has been the front-runner to win “RuPaul’s Drag Race” all season long. The 25-year-old Los Angeles queen is such an obvious threat that she was even the impetus for the epic fight between Tamisha Iman and Kandy Muse — remember, Tamisha took issue when Kandy called Symone her biggest competition. However, with Season 13 halfway over, Symone now has to watch out for another dominant contestant who’s coming for her crown: Olivia Lux.

SEEIs there a Pork Chop curse on ‘RuPaul’s Drag Race’?

This 26-year-old from New York City is a relative newbie to drag, having just started a couple of years ago. But she’s clearly putting all of these other lifelong drag queens to shame. Olivia recently matched Symone’s record of winning two main comps back-to-back, thanks to her success in the “Disco-mentary” dance challenge and the “Bossy Rossy: The RuBoot” improv challenge.

Symone’s victories came early in the season during the “Condragulations” performance challenge and the “RuPaulmark Channel” acting challenge. Don’t forget, Olivia actually came in second place to Symone for that “Condragulations” week, but she lost the lip sync when they went head-to-head to determine the winner. Perhaps we all should’ve started taking Olivia seriously as a front-runner back then, but hey, better late than never.

Olivia started out the season by beating Rose in their initial lip sync of “Ex’s & Oh’s,” forcing that well-known New York queen to the Pork Chop Lounge with the other non-winners. Olivia, meanwhile, entered the winner’s lounge where she found herself alongside Symone, Kandy, Lala Ri, Tina Burner and Gottmik.

Speaking of Gottmik, this Los Angeles competitor consistently receives high marks from the judges and even won the “The Bag Ball” challenge that required her to dress up in a trio of bag looks. As of this writing, Gottmik has second-best odds to win “Drag Race” Season 13, behind Symone and ahead of Olivia. None of these three queens have ever been in the bottom … yet.

Here’s how the Top 9 contestants rank in our winner predictions: