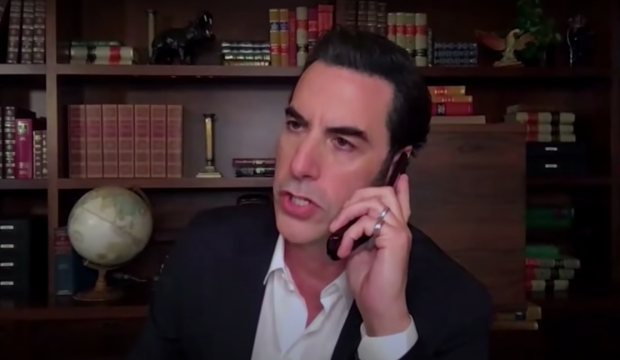 Sacha Baron Cohen has a special relationship with “Jimmy Kimmel Live.” In 2015, Baron Cohen put the smelly Borat suit back on for the first time in years for an appearance on the show, and it was after that Trump-bashing bit that Baron Cohen started thinking about doing a new Borat movie, he told Jimmy Kimmel during an appearance on Thursday’s show. Then last year, he used the show to introduce Borat’s daughter, Tutar (Maria Bakalova), to the world. Now, the “Borat Subsequent Moviefilm” Golden Globe winner is doing sketch comedy for his Oscar campaign on “Kimmel.”

In a very funny sketch on Thursday’s show, Baron Cohen was bloviating about exposing the hypocrisy of people who use their positions of power and privilege to criminally enrich themselves in between selling black market COVID-19 vaccines to other celebrities.

He took a (fake) call from Tom Cruise, to whom Baron Cohen said, “I thought the thetans were immune.” Then Kanye West hit Baron Cohen up. “I can get you Johnson & Johnson. No, not Dakota and Don,” he joked. “What do you mean, you only need one now? I’ve got you down for six. Oh, sorry, I hadn’t heard.”

Baron Cohen’s wife, Isla Fisher, made a cameo as well — getting vaccines (and a carton of Oatly) for Mark Ruffalo out of a mini-fridge behind Baron Cohen while looking very disheveled. “Isla, you look higher than Don Jr.,” he said. “Have you been drinking vaccines? How many have you had?”

When Kimmel suggested that the “Trial of the Chicago 7” Best Supporting Actor contender should be more focused on his Oscar campaign than selling vaccines, Baron Cohen replied, “This is my Oscar campaign, Jimmy. Put it this way: None of the Hollywood Foreign Press are catching COVID anytime soon.”

Then the police were on to him, and the interview turned into a high-speed chase through the streets of Los Angeles. Baron Cohen talked about how Aaron Sorkin was like Shakespeare while fleeing from the CDC’s tank. It was a funny send-up of traditional late-night awards campaign interviews that also very much was a late-night awards campaign interview. Of note: Oscar voting began Friday and continues until next week.