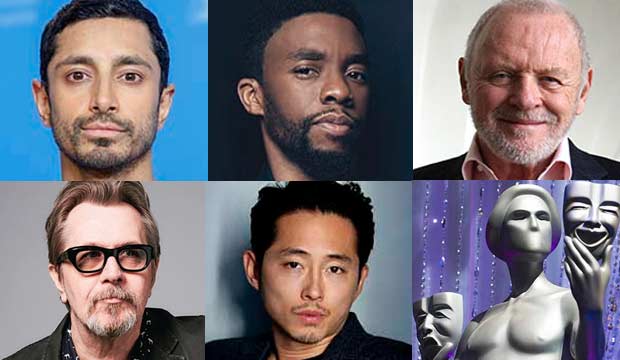 The Screen Actors Guild and academy roster of Best Actor nominees have aligned 90% of the time over the last decade and 85% overall since the SAG Awards started in 1995. This year’s roster of contenders at the SAG Awards includes all five Oscar nominees: Riz Ahmed (“Sound of Metal”), Chadwick Boseman (“Ma Rainey’s Black Bottom”), Anthony Hopkins (“The Father”), Gary Oldman (“Mank”), and Steven Yeun (“Minari”).

Oldman is the only member of the lineup to have previously won an individual award. He brought home a Best Actor trophy for “Darkest Hour” three years ago. Hopkins has five past nominations to his name, including one in this category for “Nixon” (1996).

Both would be the oldest winner in the category’s history by eclipsing the record set by Denzel Washington, who was 62 when he won for “Fences” four years ago. At 83, Hopkins is the oldest actor to ever vie for the award, while 63-year-old Oldman places among the top 14.

Boseman shared in the Best Ensemble award in 2019 as part of the cast of “Black Panther.” The late actor is now the second posthumous nominee recognized in the lead male category after Massimo Troisi (“The Postman,” 1996). He also garnered a Best Supporting Actor nomination for “Da 5 Bloods” this year as well as ensemble notices for both films, making him the first film actor to earn four bids in one year.

Yeun, a SAG newcomer, is contending against Boseman in both the individual and ensemble categories. He has also broken new ground as the first lead male nominee of East Asian descent.

Ahmed is only the second Best Actor competitor of Middle Eastern heritage after Ben Kingsley (“House of Sand and Fog,” 2004). He, Boseman, and Yeun represent the most diverse of all the Best Actor lineups in SAG history, which until now have always been made up of at least 60% White actors.