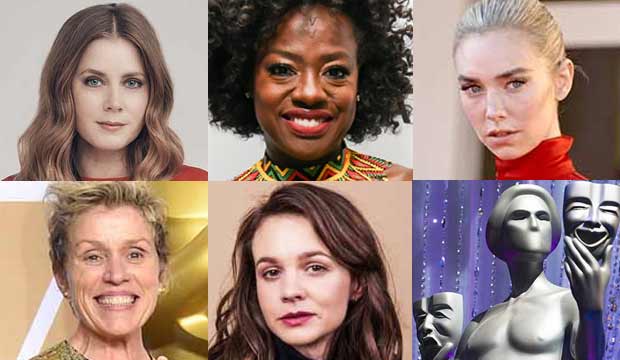 The Screen Actors Guild and academy slate of Best Actress nominees have matched 80% of the time over the last decade and 73% overall since the SAG Awards started in 1995. This year’s roster of contenders at the SAG Awards includes four Oscar nominees: Viola Davis (“Ma Rainey’s Black Bottom”), Vanessa Kirby (“Pieces of a Woman”), Frances McDormand (“Nomadland”), and Carey Mulligan (“Promising Young Woman”). The fifth, Amy Adams (“Hillbilly Elegy”), was snubbed by the actors branch of the academy in favor of Andra Day (“The United States vs. Billie Holiday”).

Three years ago, McDormand triumphed both individually and as part of the cast of “Three Billboards Outside Ebbing, Missouri.” Her first win was in 1997 for her lead role in “Fargo.” Davis’s work in “The Help” brought her Best Actress and Best Ensemble trophies in 2012. Adams is a Best Ensemble champion for “American Hustle” (2014). Mulligan contended for Best Actress for “An Education” in 2010.

Mulligan’s 11-year gap between her first and second bids is the third longest in the history of her category. McDormand holds the record (21 years) while Emma Thompson waited 18 years between her nominations for “Sense and Sensibility” (1996) and “Saving Mr. Banks” (2014).

Davis, who has also been recognized as a member of her film’s ensemble, made history as the first woman of color to be nominated for Best Actress more than once. Four years ago, she and Octavia Spencer jointly set the same record on the supporting side. Spencer is a two-time Best Ensemble winner (for “The Help,” 2012 and “Hidden Figures,” 2017), meaning that Davis could be the second woman of color to pull off that double act.

At 63, McDormand would be the third oldest after Close and Christie. She would also be the first lead female to prevail three times, having already become the first dual winner.