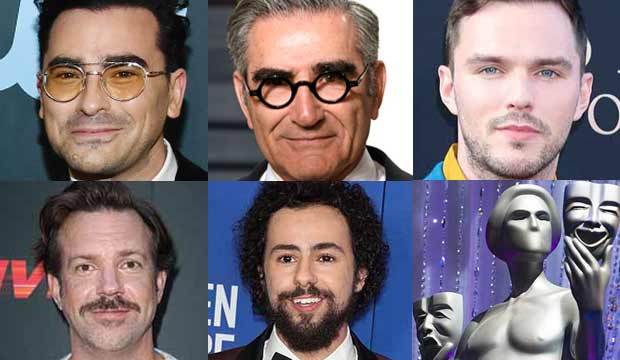 Since their first awards ceremony in 1995, the Screen Actors Guild has honored the individual work of television actors in continuing drama and comedy series as well as limited series and TV movies. Unlike at the Emmys and most other TV awards shows, SAG-nominated actors are not separated by their lead or supporting status. And a continuing series’ classification as a drama or comedy is predetermined before nominations voting begins.

This year’s group is the first to consist entirely of actors with no previous individual SAG bids. The Levys, who competed as members of their series’ ensemble last year, are the only ones in the bunch to have even been nominated before. They have once again been placed in contention for Best Ensemble, where they are challenged this time by Hoult and Sudeikis.

The Levys are now the first real-life father-son duo to face off in an individual category and the second pair to be recognized here for playing characters with that relationship. Peter Boyle and Ray Romano (“Everybody Loves Raymond”) became the first in 2002, and were then included in the 2004 lineup alongside Boyle’s other TV son, Brad Garrett.

Whoever prevails will be only the 12th winner in this category’s 27-year history. Such a low number of different winners is due to six actors having won more than once. Alec Baldwin won for all seven seasons of “30 Rock” between 2007 and 2013. He is followed by Tony Shalhoub, who has won twice each for “Monk” and “The Marvelous Mrs. Maisel.” Sean Hayes (“Will & Grace”) and William H. Macy (“Shameless”) have amassed three wins each, while Michael J. Fox (“Spin City”) and John Lithgow (“3rd Rock from the Sun”) have earned two apiece.

Either Youssef (30) or Hoult (31) would make history as the youngest man to win this award by taking the record from Hayes, who was 31 when he bagged his first trophy in 2002. At 74, Eugene Levy would become the oldest champion here by surpassing 71-year-old Jeffrey Tambor (“Transparent,” 2016).