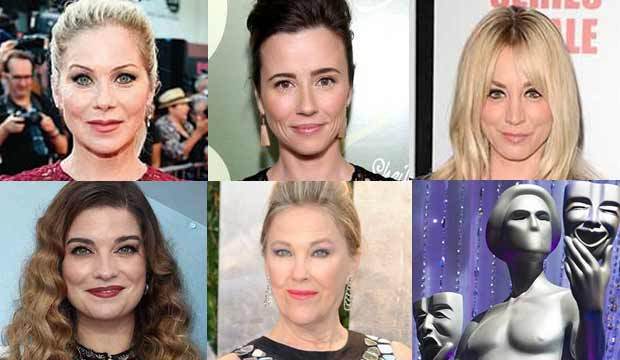 Unlike at the Emmys and most other TV awards shows, the Screen Actors Guild does not have separate categories for starring and featured roles (it does make this distinction on the film side). That means featured players may be pittted against the stars of their shows.

This year’s nominees have all been recognized by SAG at least once before, but none has ever won. They are all also in contention for this year’s Best Ensemble prize, which Murphy and O’Hara jointly vied for last year but lost to the cast of “The Marvelous Mrs. Maisel.” Cuoco competed for the award as a cast member of “The Big Bang Theory” six consecutive times between 2012 and 2017.

Applegate and O’Hara face each other here for the second year in a row, having both been bested in 2020 by Phoebe Waller-Bridge (“Fleabag”). Applegate received three bids in this category for “Samantha Who?” between 2008 and 2010, making her one of four actresses to be recognized here for multiple programs. The first three to achieve the feat were Candice Bergen (“Murphy Brown” and “Boston Legal”), Julia Louis-Dreyfus (“Seinfeld,” “The New Adventures of Old Christine,” and “Veep”), and Tracey Ullman (“Tracey Takes On” and “Tracey Ullman’s State of the Union”).

Although 10 of this category’s past lineups have included pairs of actresses from the same series, this one is the first to contain double pairs. This is the fifth female comedy roster in a row to include at least one duo, after Alex Borstein and Rachel Brosnahan (“The Marvelous Mrs. Maisel”) faced each other last year, and Jane Fonda and Lily Tomlin (“Grace and Frankie”) did so every year from 2017 to 2019.