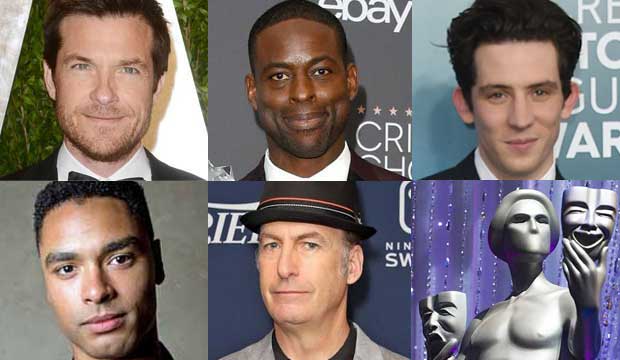 Unlike at the Emmys and most other TV awards shows, SAG does not separate lead and supporting players. That often means that co-stars are pitted against each other as happened this year in Best TV Drama Actress where three women from “The Crown” face off against a pair of “Ozark” stars. That is not the case in Best TV Drama Actor, which has five leading men in contention.

Bateman, Brown, and Odenkirk have already faced off twice in this category for these same roles. Brown triumphed in 2018, while Bateman emerged victorious the following year. Although Brown is the only one in this year’s lineup to be left out of the Best Ensemble race, he and his castmates did earn back-to-back wins there in 2018 and 2019. O’Connor shared in the collective prize last year, while Odenkirk won as a “Breaking Bad” cast member in 2014.

Two years ago, Odenkirk was one of the first actors to be nominated for playing the same character on two different programs when he earned his first double bids for “Better Call Saul.” He shared that honor with Jonathan Banks and Giancarlo Esposito, his costars on “Breaking Bad” and its prequel series. He is also the one of four men to be individually nominated for playing a fictional character that originated on a different series. Kelsey Grammer (“Frasier”) became the first in 1995, followed by William Shatner and James Spader (“Boston Legal”) in 2006. Grammer first played his character on “Cheers,” while Shatner and Spader originally played theirs on “The Practice.”

This year marks the first occurrence of two Black men (Brown and Page) competing against each other for this award. Brown broke new ground as the first Black man ever nominated here just four years ago and later became the second to win in an individual TV category after Idris Elba, who triumphed for the limited series “Luther” in 2016.

A victory for either O’Connor (30) or Page (31) would set a new record for youngest victor in this category. The distinction is currently held by Anthony Edwards, who was 33 when he won for “ER” at the second SAG ceremony in 1996. Only two actors younger than O’Connor have ever been nominated for this award: 29-year-old Rick Schroder (“NYPD Blue,” 2000) and 30-year-old Patrick J. Adams (“Suits,” 2012).