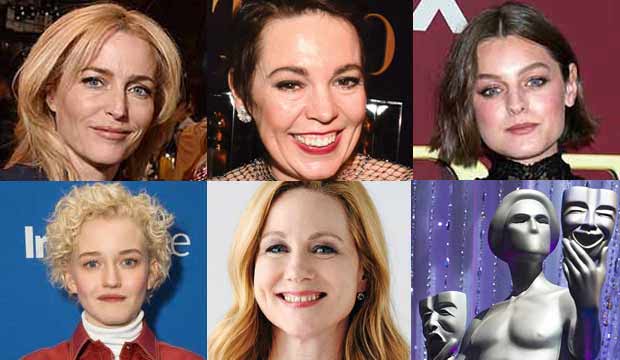 Since their first awards ceremony in 1995, the Screen Actors Guild has honored the individual work of TV actresses in continuing drama and comedy series as well as limited series and TV movies. Unlike at the Emmys and most other TV awards shows, SAG does not separate lead and supporting players. To that end, this year’s Best TV Drama Actress pits two sets of co-stars against each other

Anderson is the only member of this year’s lineup to have won this award before. She scored back-to-back victories for “The X-Files” in 1996 and 1997 before going on to earn four more consecutive bids. Linney brought home a trophy in 2009 for her work on the miniseries “John Adams,” while Colman and her “Crown” castmates shared in last year’s Best TV Drama Ensemble award. All five contenders are also up for the ensemble prize this year.

The ladies from “The Crown” are the second trio of costars to compete against each other here after Lorraine Bracco, Edie Falco, and Nancy Marchand from “The Sopranos” (2000). This year’s group is the first to be made up of a trio from one series and a pair from another, although there have been two past lineups that involved double pairs. When Bracco and Falco faced each other again in 2002 and 2003, each roster also included a pair of women from “The West Wing”: First, Stockard Channing and Allison Janney, and then Janney and Lily Tomlin.

If Anderson pulls off a third victory, she will tie Falco’s record for second most wins in this category. Julianna Margulies has the most, with two wins each for “ER” and “The Good Wife.” She also holds the record for most nominations in this category with nine, followed by Anderson, Falco, and Kyra Sedgwick with seven each.

At 57, Linney could become the fourth oldest winner in this category after Maggie Smith (79, “Downton Abbey,” 2014), Jessica Lange (62, “American Horror Story,” 2012), and Sally Field (62, “Brothers and Sisters,” 2009). Both Corrin (25) and Garner (27) have a chance at setting a new record for youngest champion here by taking the distinction from Anderson, who was 27 when she nabbed her first win.