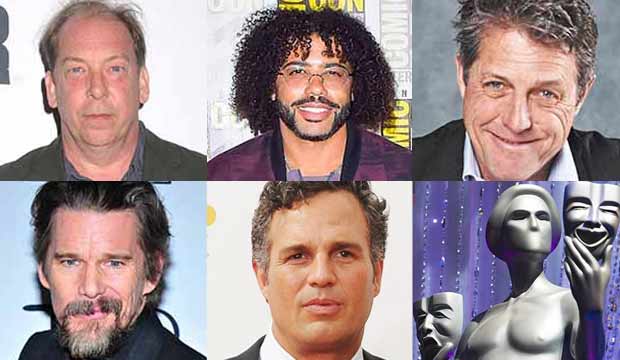 Unlike the Emmys, the SAG Awards do not distinguish between lead and supporting roles. That is how featured players Bill Camp (“The Queen’s Gambit”) and Daveed Diggs (“Hamilton”) are in contention for Best TV Movie/Limited Series Actor against stars Hugh Grant (“The Undoing”), Ethan Hawke (“The Good Lord Bird”), and Mark Ruffalo (“I Know This Much Is True”).

Grant’s role in “A Very English Scandal” earned him a bid two years ago. He, along with Ruffalo and Hawke, was previously nominated on the feature film side in both the Best Supporting Actor and Best Ensemble categories. Hawke and Ruffalo competed in 2015 (for “Boyhood” and “Foxcatcher,” respectively), but both lost to J. K. Simmons (“Whiplash”).

A bookend win would make Ruffalo the fourth person to triumph here more than once, after Gary Sinise, Al Pacino, and Paul Giamatti. He would also be the second multiple-nominee to maintain a perfect record in this category after Giamatti, who prevailed on both of his bids in 2009 and 2012. And, having portrayed identical twins in his miniseries, he would be the first to win the award for taking on dual roles.

Diggs, a SAG newcomer, has also been nominated for playing two characters: Revolutionary War hero Marquis de Lafayette and President Thomas Jefferson. He could be the fourth person to win this award for playing a U.S. head of state, after Sinise (as Harry S. Truman in “Truman,” 1996), Giamatti (as John Adams in “John Adams,” 2009), and Bryan Cranston (as Lyndon B. Johnson in “All the Way,” 2017).

Diggs would be the second Black man to score a victory here, following in the footsteps of Idris Elba (“Luther,” 2016). At 39, he would also be the second youngest recipient of the trophy, after Darren Criss, who was 31 when he scored a win for “The Assassination of Gianni Versace: American Crime Story” in 2019.