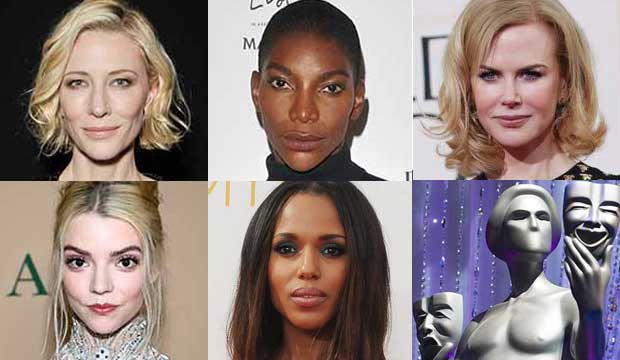 Unlike on the film side, the SAG Awards do not distinguish between leading and featured roles when it comes to rewarding TV performances. While this year’s TV Drama Actress races pits star turns against scene-stealers, the five nominees for Best TV Movie/Limited Series Actress are all leads: Cate Blanchett (“Mrs. America”), Michaela Coel (“I May Destroy You”), Nicole Kidman (“The Undoing”), Anya Taylor-Joy (“The Queen’s Gambit”), and Kerry Washington (“Little Fires Everywhere”).

Our odds currently favor Taylor-Joy (82/25), who is predicted to add this award to a mantle already crowded with Golden Globes and Critics Choice trophies. She is followed in order by Blanchett (4/1), Coel (4/1), Kidman (9/2), and Washington (9/2).

Kidman is a previous winner in this category, having bagged a trophy in 2018 for “Big Little Lies.” She also reaped bids for the TV movies “Hemingway & Gellhorn” (2013) and “Grace of Monaco” (2016). A victory this year would make her the fourth woman to win this award twice, after Alfre Woodard, Helen Mirren, and Queen Latifah.

This marks the second time that two Black women (Coel and Washington) have competed against each other for this award. The first instance also involved Washington; she was nominated for “Confirmation” in 2017 alongside Audra McDonald (“Lady Day at Emerson’s Bar and Grill”). They both lost to Sarah Paulson (“The People vs. O.J. Simpson: American Crime Story”).

Blanchett has never been nominated for a TV performance before, but she has conquered every possible feature film category. She won as a cast member of “The Lord of the Rings: The Return of the King” in 2004, and then for her supporting and lead roles in “The Aviator” (2005) and “Blue Jasmine” (2014), respectively. If she wins this year, she will follow Mirren, Viola Davis, and Allison Janney as the fourth actress to triumph in four different SAG categories.

The most recent TV Movie/Limited Series Actress champs are Michelle Williams (“Fosse/Verdon,” 2020), Patricia Arquette (“Escape at Dannemora,” 2019), Kidman (2018), and Paulson (2017). This year’s winner will be revealed during the 27th SAG awards ceremony, airing April 4 on TBS and TNT.