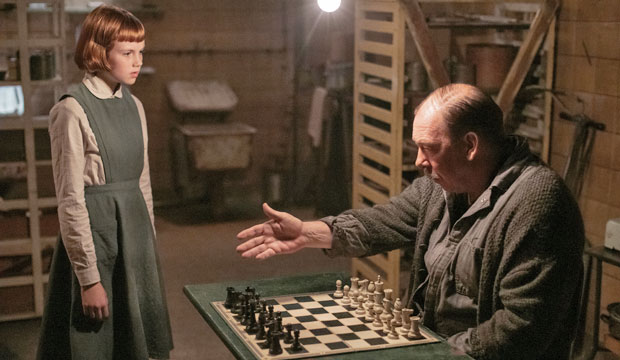 Since he began his acting career, Bill Camp has consistently divided his time between television, film, and theater. After nearly three decades the Juilliard graduate finally started to earn recognition with nominations for a Tony in 2016 (“The Crucible”) and an Emmy in 2017 (“The Night Of”). Now, for his work on “The Queen’s Gambit,” his peers have honored him with his first Screen Actors Guild Award bid.

Camp faces off against Daveed Diggs (“Hamilton”), Hugh Grant (“The Undoing”), Ethan Hawke (“The Good Lord Bird”), and Mark Ruffalo (“I Know This Much Is True”) in the TV movie/limited series actor race. Camp, Diggs and Hawke are new to this category, though Hawke is now a four-time SAG nominee overall. Grant and Ruffalo have each competed in this race once before. Grant earned a bid for “A Very English Scandal” in 2019 and Ruffalo won for “The Normal Heart” in 2015. Grant now has a total of four career nominations, while Ruffalo has six.

Netflix’s “The Queen’s Gambit” is a seven-episode adaptation of the novel of the same name and tells the story of Beth Harmon (Anya Taylor-Joy), an orphaned girl who develops an incredible knack for chess but also a dependency on alcohol and drugs. Camp portrays the orphanage’s custodian, Mr. Shaibel, who plays a pivotal role in kickstarting the plot by teaching Beth how to play the game. The gruff yet kind man instills in Harmon a sense of determination that lasts throughout her life and inspires her to continually strengthen her skills.

Taylor-Joy is up for the TV movie/limited series actress award for her portrayal of Harmon during the character’s teenage years and adulthood (Isla Johnston plays the role as a child). She is also a first-time SAG nominee. She and Camp contributed to Netflix’s massive showing this year: the streaming platform amassed a total of 17 nominations on the TV side, taking up over one-third of the available slots.

Although this is his first SAG outing, Camp has appeared in several TV programs that have collectively earned over three dozen bids, including “Boardwalk Empire,” “Damages,” “The Good Wife,” and “Law & Order.” The esteemed character actor has also shown up in numerous awards contenders on the big screen like “Lincoln,” “12 Years a Slave,” “Birdman,” “Vice,” and “Joker,” just to name a few. If he is victorious, he will be the first rookie nominee to win in his category since 2013 (Kevin Costner, “Hatfields and McCoys”).