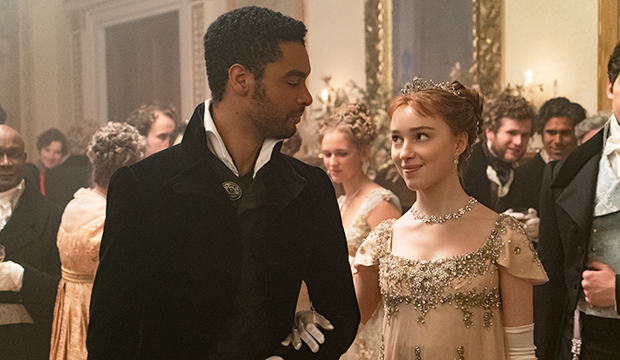 It’s no secret that the world burns for “Bridgerton.” The romantic period drama dominated the conversation after it debuted on Netflix on Christmas Day and became an instant hit for the streaming service. After we were surprised to see the series shut out at the Golden Globe Awards, we were caught off guard once again when it instead broke through at the Screen Actors Guild Awards a day later, earning two citations, including one for the show’s cast in Best TV Drama Ensemble.

The “Bridgerton” cast is shortlisted alongside those of fellow Netflix series “The Crown” and “Ozark,” AMC’s “Better Caul Saul” and HBO’s “Lovecraft Country.” The defending and only previous champ in the race, “The Crown” is the most nominated series in this category with bids for all four of its seasons under its belt. Next in line are “Better Call Saul” and “Ozark” with two noms apiece, which both bagged in 2019 and this year. Finally, “Lovecraft Country” joins “Bridgerton” as the other first-timer in the category.

SEEEmmy predictions slugfest: What can take down ‘The Crown’ for Best Drama Series? [WATCH]

Save for “Lovecraft Country,” all nominated shows racked up solo acting nominations in addition to their ensemble mentions. “The Crown” scored the most with four for Gillian Anderson, Olivia Colman, Emma Corrin and Josh O’Connor, thus earning its highest total of solo and overall citations to date. In second place is “Ozark,” which matched its 2019 haul with three individual bids for Jason Bateman, Julia Garner and Laura Linney. Tied for third are “Better Call Saul” and “Bridgerton” with one nomination each for their respective male leads, Bob Odenkirk and Regé-Jean Page.

Based on Julia Quinn’s series of romance novels and created by Shondaland alum Chris Van Dusen, “Bridgerton” is set in the competitive world of Regency-era London and centers on the titular aristocratic family. The debut season focuses primarily on the romance between Daphne Bridgerton (Phoebe Dynevor), the eldest daughter of widowed Violet Bridgerton, and Simon Bassett, Duke of Hastings (Page), a mysterious young suitor who returns to England to settle his father’s affairs. While the former enters the marriage market in search of a husband, the latter is dead-set against marriage.

For the show’s inaugural installment, there are 28 actors listed on the SAG ballot, making its cast the largest one in contention. The last soapy British drama with a large cast that competed in this category, “Downton Abbey,” dominated, scooping up the prize for the best TV drama ensemble three times in four years (2013, 2015-2016). It’s not hard to imagine “Bridgerton” following in “Downton’s” footsteps as it, too, is full of family drama and romantic intrigue as its characters navigate the cutthroat world of high society during dinners, balls and parties.

SEESAG Awards nominee profile: Regé-Jean Page (‘Bridgerton’) is looking to duke it out for the win on his first try

Plus, it similarly features its large ensemble by bouncing its characters off of one another in contained settings, for which SAG-AFTRA voters are suckers. That might be why shows like “Downton,” “ER,” “The West Wing,” “Grey’s Anatomy” (from “Bridgerton” executive producer Shonda Rhimes) and “Mad Men” were able to prevail while the gigantic cast of “Game of Thrones” wasn’t; “Thrones” told so many disparate stories that many of its actors didn’t interact for years at a time.

Given the guild’s tendency to be a bit behind the curve when it comes to new shows, it is significant that “Bridgerton” managed to break through at the SAG Awards just a little over a month after its first season was released. But in hindsight, it’s not all too surprising: these voters love Netflix — which took up over one-third of the available slots on the TV side this year — and a good hit in the vein of previous TV drama ensemble champs “Stranger Things” and “This Is Us.” To that end, the fact that “Bridgerton” was Netflix’s most watched original series launch to date should not be undervalued. Visibility is key at the these awards, whose voting body comprises roughly 160,000 SAG-AFTRA members, ranging from well-known actors to broadcast journalists to DJs.