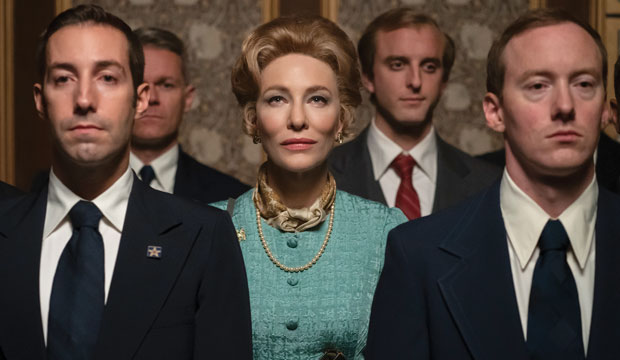 After Cate Blanchett won her first Screen Actors Guild Award as an ensemble member in “The Lord of the Rings: The Return of the King” in 2004, it took her another 10 years to conquer the remaining two film acting categories. She garnered a supporting actress win for “The Aviator” in 2005 and then a lead actress victory for “Blue Jasmine” in 2014. Now, with her performance in the miniseries “Mrs. America,” she is looking to follow in the footsteps of Helen Mirren, Viola Davis, and Allison Janney by earning a trophy in a fourth category.

Blanchett faces off against Michaela Coel (“I May Destroy You”), Nicole Kidman (“The Undoing”), Anya Taylor-Joy (“The Queen’s Gambit”) and Kerry Washington (“Little Fires Everywhere”) in the TV movie/limited series actress race. Coel and Taylor-Joy are SAG newcomers. Washington has competed in this category once before (“Confirmation,” 2017), in addition to an ensemble nom for the film “Ray” in 2005 and an individual citation for the TV drama “Scandal” in 2014. Kidman has been nominated three times in this category, winning for “Big Little Lies” in 2018; altogether she has been nominated 14 times by the guild.

FX’s “Mrs. America” is a nine-episode miniseries that chronicles the attempted ratification of the Equal Rights Amendment during the 1970s. Blanchett plays Phyllis Schlafly, a conservative activist who sets out to derail the efforts of progressive women by founding the “STOP ERA” campaign. Whether Schlafly is the central character of a given episode or not, Blanchett succeeds in humanizing the ire-inducing figure and in the process inspires deep conversations about gender equality. She keeps running into steamrollers on the awards scene, though, losing the Emmy to Regina King (“Watchmen”) and the Golden Globe and Critics Choice Award to Taylor-Joy.

Although Blanchett is her program’s only bid (none of her co-stars like Tracey Ullman, Margo Martindale or Emmy winner Uzo Aduba were nominated alongside her), that’s not necessarily a disadvantage at these awards. In fact, this would mark the 15th time in the category’s 27-year history that a sole representative triumphed. The most recent additions to that list were S. Epatha Merkerson (“Lackawanna Blues,” 2006), Queen Latifah (“Life Support,” 2008, and “Bessie,” 2016) and Patricia Arquette (“Escape at Dannemora,” 2019).