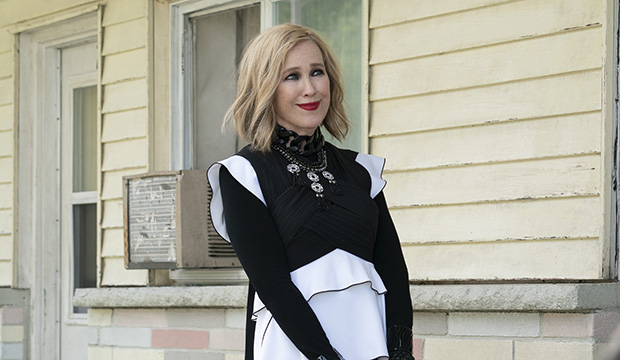 “Schitt’s Creek” fans have grown accustomed to seeing Catherine O’Hara give hilarious acceptance speeches for her work as Moira Rose on the Pop TV comedy series, but the upcoming Screen Actors Guild ceremony will be her last of the awards derby. O’Hara has already prevailed at the Emmys, TCA Awards, Golden Globes and Critics Choice, and now she’s the obvious front-runner to claim the Best TV Comedy Actress trophy at the SAG Awards.

The Canadian actress contends against the following co-nominees: Christina Applegate (“Dead to Me”), Linda Cardellini (“Dead to Me”), Kaley Cuoco (“The Flight Attendant”) and her TV daughter Annie Murphy (“Schitt’s Creek”). None of these actresses has ever prevailed before at the SAG Awards either as an individual or for an ensemble prize, so history will be made for one of them. All five contenders are also nominated this year as members of their overall casts.

O’Hara is likely to become the fourth person in history to win all five major TV acting awards in the same year, following Sarah Paulson (“The People v. O.J. Simpson”), Michelle Williams (“Fosse/Verdon”) and Phoebe Waller-Bridge (“Fleabag”). Others have pulled off this rare five-peat over several years, but just these performers have prevailed for the same TV season.

The actress has a previous history with the guild, being nominated for “Temple Grandin” (2010) in the movie/miniseries category. She lost to the lead of that project, Claire Danes, as it’s often difficult for supporting players to overcome their main stars. A decade later at the 2020 ceremony, O’Hara received a pair of nominations for “Schitt’s Creek” in female actress (losing to Waller-Bridge) and ensemble cast (losing to “The Marvelous Mrs. Maisel”). Thus, her pair of SAG noms this year are the fourth and fifth of her career.

In the final episode of “Schitt’s Creek,” Moira officiates the wedding between her son David (Dan Levy) and his new husband Patrick (Noah Reid). She then tearfully leaves the small town and moves back to Hollywood with her husband Johnny (Eugene Levy). It was a full-circle moment indeed for the one-time spoiled character, who originally hated the blue-collar area and saw it as a major step down from her former life as a soap opera star.