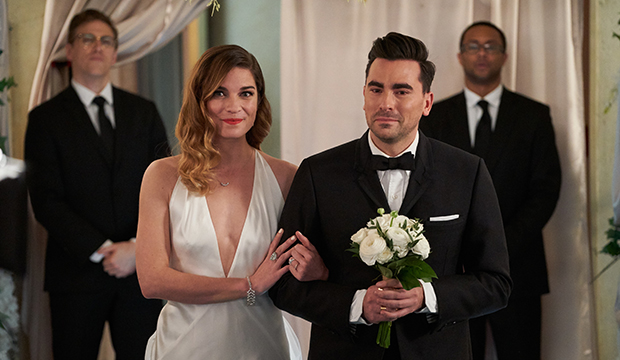 Dan Levy was first nominated at the SAG Awards last year in Best Comedy Ensemble for “Schitt’s Creek.” The Pop TV laugher has experienced an unprecedented slow build in momentum, before it finally exploded on the awards circuit for its final season. This year Levy returns to the SAG Awards in the Comedy Ensemble race, but he also nabbed his first individual nomination for Best TV Comedy Actor.

Levy portrays David Rose on “Schitt’s Creek,” the son of an affluent family gone bankrupt. The final season of the hit comedy sees David marry his partner Patrick (Noah Reid) in a heartfelt ceremony. He also chooses to leave dreams of big cities and A-List social circles behind in order to buy a house in Schitt’s Creek with his new husband.

The actor is nominated alongside Nicholas Hoult (“The Great”), Jason Sudeikis (“Ted Lasso”), Ramy Youssef (“Ramy”) and his own father Eugene Levy (“Schitt’s Creek”). Youssef is a first time SAG nominee. Hoult and Sudeikis are also first time nominees, but contend in both Comedy Actor and Comedy Ensemble for their respective series. Eugene Levy has the same trajectory as his son at the SAG Awards: his only previous nomination occurred last year as part of the “Schitt’s Creek” ensemble.

The SAG Awards do not divide their TV categories into lead and supporting like many other awards bodies, instead opting for a combined categories that are only separated by gender. Dan Levy is attempting to follow the tradition of some past comedic scene stealers who won this race despite having a supporting role in their show. Jason Alexander (“Seinfeld”) was the first person to achieve this feat (and the inaugural winner of this category). Other supporting players who were victorious here are David Hyde Pierce (“Frasier”), Sean Hayes (“Will & Grace”), Ty Burrell (“Modern Family”) and Tony Shalhoub (“The Marvelous Mrs. Maisel”). Burrell and Shalhoub won this category twice for their supporting turns, while Hayes managed three wins.

Should Levy lose the category, he might have to blame Dad. There are plenty of examples where two nominees from the same series lose the award. Alan Arkin and Michael Douglas have lost twice now for “The Kominsky Method.” Burrell could only win when he didn’t have to compete against a “Modern Family” co-star like Eric Stonestreet or Ed O’Neill. William Shatner and James Spader split the vote on the only year they made the list for “Boston Legal.”

Still, Dan Levy is coming off a banner year. He clinched four Emmy wins for producing, writing, directing and starring in “Schitt’s Creek.” The beloved series captured the hearts of viewers during the pandemic and cemented Levy as a major voice in comedy. A SAG win seems like the perfect end cap to his “Schitt” victory lap.