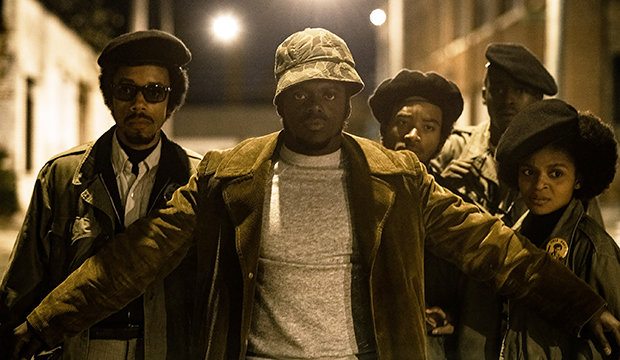 Daniel Kaluuya emerged on the scene in 2017 with “Get Out,” a dark comedy hit that unexpectedly took the awards season by storm. He was nominated for his first two Screen Actors Guild awards that year, for his lead performance and as part of the ensemble. This year, he contends in supporting for “Judas and the Black Messiah.” Kaluuya is fresh off of Golden Globe and Critics Choice wins for the performance.

In the Warner Bros. film, Kaluuya portrays Fred Hampton, chairman of the Chicago chapter of the Black Panther Party, a man so persuasive as a progressive political figure that the FBI and Chicago Police Department orchestrated his assassination in 1969. As Hampton, Kaluuya weaves together a portrait of a man who is in one palm falling in love with an equally young Deborah Johnson (Dominique Fishback) and in the other, inspiring a community of disenfranchised people with his powerful speeches. As the titular “Black Messiah,” Kaluuya plays opposite the “Judas” of Lakeith Stanfield‘s William O’Neal for a majority of the film.

Kaluuya faces off here against three of the men he beat at the Globes: Sacha Baron Cohen (“The Trial of the Chicago 7”), Jared Leto (“The Little Things”) and Leslie Odom Jr. (“One Night in Miami”). The fifth nominee is Chadwick Boseman (“Da 5 Bloods”), who also contends in lead and won that Globe for “Ma Rainey’s Black Bottom.” As the Globe and Critics Choice winner, Kaluuya is aiming for a sweep through the season and will have to win his first solo SAG in order to do it.

Kaluuya won his first-ever SAG two years ago as a member of the winning ensemble of “Black Panther” alongside Boseman. With that win under his belt, Kaluuya shares an awful lot in common with a recent winner of this category (twice!), Mahershala Ali. When Ali won his first SAG it was a solo win for 2016’s “Moonlight,” and though Kaluuya’s first was in ensemble, Ali also owns an ensemble trophy for that same year as part of the “Hidden Figures” cast. A win here for Kaluuya would put him on par with where Ali was at in 2018 — one solo and one ensemble win.

What Kaluuya also shares in common with Ali is that when Ali won his second solo SAG award for “Green Book” two years ago, it was one of only a handful of times this category went to an actor not also nominated for ensemble with their film. That might not be a good thing though. Prior to 2019, it had only happened six other times in the last two decades: J.K. Simmons (“Whiplash”), Christopher Plummer (“Beginners”), Heath Ledger (“The Dark Knight”), Paul Giamatti (“Cinderella Man”), Christopher Walken (“Catch Me If You Can”) and Albert Finney (“Erin Brockovich”). But as long as Kaluuya holds close to the comparison to Ali, he should plan to take another swish of the broom in the supporting actor race.