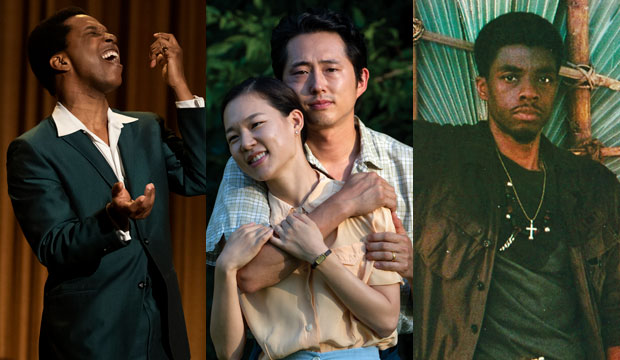 The Golden Globe nominations weren’t bad in terms of spreading the wealth to actors and filmmakers who aren’t just white men, but their Best Picture races were mostly a whitewash. It was a different story when the Screen Actors Guild announced their nominees on February 4. Check out the complete list of nominees here.

As is often the case, they were more inclusive than a lot of other awards groups in terms of recognizing BIPOC actors (their recent winners include “Hidden Figures” and “Black Panther”). But while the Golden Globes had predominantly white Best Picture nominees, the SAG Awards have overwhelmingly male nominees counted among the best film ensemble casts of the year.

“Da 5 Bloods” is a nominated drama about a group of Black Vietnam vets trying to recover their lost squad commander and a treasure they left behind. It has 15 nominated actors among its cast, only four of whom are women: Le Y Lan, Van Veronica Ngo, Sandy Huong Pham and Melanie Thierry.

“Minari” is the closest to gender parity. That family drama about Korean immigrants starting a farm has seven nominated cast members, including three women: Noel Kate Cho, Yeri Han and Yuh-Jung Youn, the last of whom is also nominated individually for her supporting performance.

“Ma Rainey’s Black Bottom,” adapted from August Wilson‘s stage play about the challenges facing Black musicians during a recording session, has only six nominated cast members, and the only woman is Viola Davis, who is also a lead-acting nominee for playing the title role.

“One Night in Miami” tells the story of four male civil rights icons gathering in a Florida hotel room, so it’s no surprise that its cast is male-heavy. It has 10 nominated cast members, with just two women: Joaquina Kalukango and Nicolette Robinson.

And “The Trial of the Chicago 7,” about a group of anti-war activists railroaded by the justice system after violence breaks out at a protest, has 10 actors who qualified for nominations for the film. None of them are women.

So out of 48 total actors recognized across the five nominated ensembles, only 10 are women, or 21%. Other films with a female focus were left out of the top category like “Nomadland,” “Promising Young Woman” and “The Prom” missed out in the top race. Though, to be fair, a lot of male-dominated films missed out too like “Mank,” “Judas and the Black Messiah” and “News of the World.”

On the other hand, the ensemble nominees include many Black and Asian actors. “Chicago 7” is actually the only film whose nominated cast is majority white. Alas, Latinx and Indigenous films and performers have been all but nonexistent in this year’s movie awards conversation, and not just at the SAG Awards.

Hollywood isn’t going to fix all its blind spots overnight, of course, so there are plenty of reasons to be encouraged by this lineup. The last #OscarsSoWhite controversy was only five years ago, after all, so having marginalized groups represented all over the ballot like this (consider that “Chicago 7” is also the only ensemble nominee with a white male director) makes me hopeful for awards seasons to come.