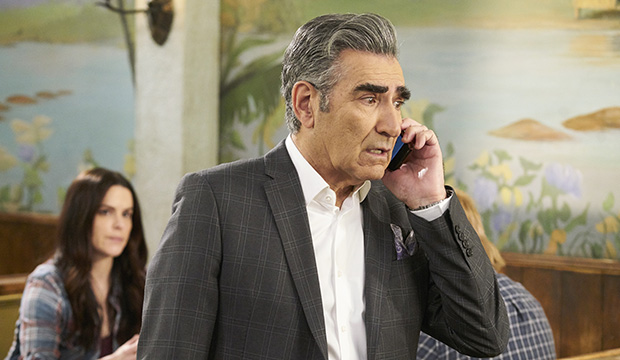 For much of his career, the bulk of Eugene Levy’s awards cache came courtesy of his duties as a writer. But his lead role in the Pop TV comedy “Schitt’s Creek,” which he also co-created, has netted him well deserved kudos for his acting. His latest acting nominations are courtesy of his peers at SAG. Levy scored his first individual SAG Award nomination for Best TV Comedy Actor, and is also nominated with the rest of the “Schitt” cast for Comedy Ensemble. Can the veteran performer win his first individual SAG Award?

At the upcoming ceremony, Levy is nominated for Comedy Actor alongside Nicholas Hoult (“The Great”), Jason Sudeikis (“Ted Lasso”), Ramy Youssef (“Ramy”), and his own son/co-star Dan Levy (“Schitt’s Creek”). Youssef is a first time SAG nominee. Hoult and Sudeikis are also first time nominees, but also contend in Comedy Ensemble for their respective series. The father-son Levy duo both competed in the cast race last year, but are first timers in the individual category.

Levy is well known for his zany character work in Christopher Guest films. But the actor chose to play things straight with Johnny, the patriarch of the Rose family on “Schitt’s Creek.” That change of pace has resulted in more awards attention than any other role in Levy’s career. The final season saw Johnny turn the life lessons he learned from small town living into his newest business venture: a chain of charming Rosebud Motels.

SAG voters are notorious for feting repeat winners in their TV categories. Alec Baldwin (“30 Rock”) has won this Comedy Actor race a whopping seven times, Tony Shalhoub has picked up four wins (two for “Monk,” two for “The Marvelous Mrs. Maisel”), while Sean Hayes (“Will & Grace”) and William H. Macy (“Shameless”) both have three wins. The fact that this year’s lineup features a crop of first time nominees makes for a wide open race.

Being a respected member of the industry, with a long and storied career could help Levy find an edge over his fellow nominees. While it was common for winners of this category to be younger performers in their 30s, the trend has shifted towards older veterans as of late. The working actors who vote for the SAG Awards can’t help but look up to the thespians who have been able to carve out stellar careers for decades. At age 74, Levy is the oldest and most experienced actor of the bunch. The race may be his to lose.