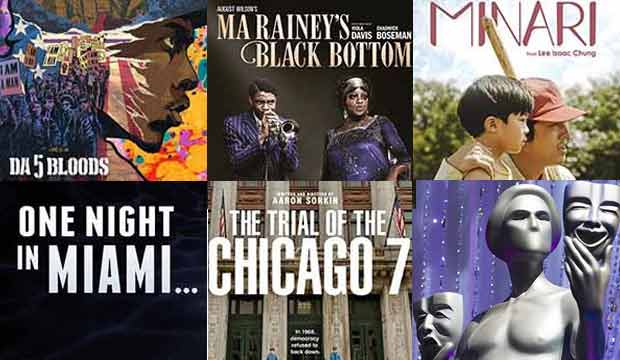 Since their second annual awards ceremony in 1996, the Screen Actors Guild has honored the collective work of films’ casts in addition to individual performers. Although SAG only gives out acting awards, many prognosticators view the winner of this prize as the most likely Best Picture Oscar winner, since the two awards have aligned 50% of the time over the last decade. The 2021 nominees are “Da 5 Bloods,” “Ma Rainey’s Black Bottom,” “Minari,” “One Night in Miami,” and “The Trial of the Chicago 7.” The winner will be revealed during the 27th SAG awards ceremony, airing April 4 on TBS and TNT.

Of the 47 actors who qualify as nominees in this year’s lineup, 29 are people of color. This makes for the highest single-year percentage of POC nominees in the category’s history (62%). Last year’s group was made up only 26% POC, most of whom were in the winning film, “Parasite.” There is at least one person of color in all five of this year’s casts, which has only happened once before, in 2018.

In addition to facing off here, “Da 5 Bloods” and “The Trial of the Chicago 7” are both up for Best Stunt Ensemble, marking the first time that two films have ever competed against each other for both awards. Each film also earned a Best Supporting Actor nomination (for Chadwick Boseman and Sacha Baron Cohen, respectively). The other stunt ensemble nominees are “Mulan,” “News of the World,” and “Wonder Woman 1984.”

A total of six actors who are competing as part of their films’ ensembles have also been recognized individually. Boseman and Viola Davis (both from “Ma Rainey’s Black Bottom”) and Steven Yeun (“Minari”) are all vying for lead acting awards, while Leslie Odom Jr. (“One Night in Miami”) and Yuh-jung Youn (“Minari”) join Boseman and Baron Cohen on the supporting side.