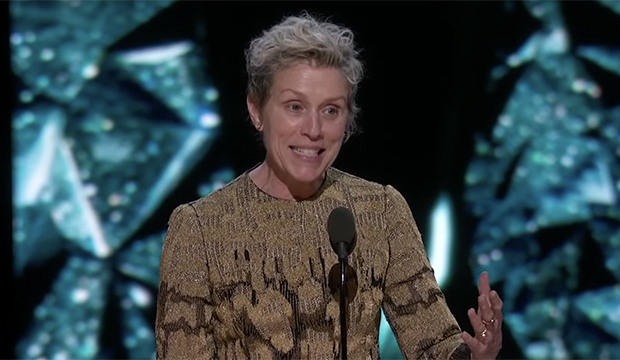 Frances McDormand netted her eighth Screen Actors Guild Award nomination this year for her star turn in “Nomadland” as Fern, a woman who adopts a nomadic lifestyle following the death of her husband. While she did not win the Golden Globe for the performance, the respect she has from her fellow actors could cement a victory at the guild on her way to a third Oscar.

McDormand isn’t the only person nominated for Best Actress this year with a winning way with SAG. Both Amy Adams (“Hillbilly Elegy”) and Viola Davis (“Ma Rainey’s Black Bottom”) are now up to 10 total SAG nominations apiece, with one win for the former and a whopping five for the latter. Vanessa Kirby (“Pieces of a Woman”) has two past SAG nominations as part of the ensemble of “The Crown” and Carey Mulligan (“Promising Young Woman”) has three other nominations.

From McDormand’s seven previous bids, she has four wins. She won on her first nomination in 1997 for “Fargo,” a second in 2015 for the miniseries “Olive Kitteridge” and two in 2018 for “Three Billboards Outside Ebbing, Missouri” for her individual performance and as part of the film’s ensemble. She earned individual and ensemble nominations for “Almost Famous” in 2001 and another solo bid for “North Country” in 2006.

There are few actresses able to play working-class Americans so authentically. It’s part of why she won Oscars for “Fargo” and “Three Billboards” and an Emmy for “Olive Kitteridge.” “Nomadland” might seem like an extension of that kind of character she’s played before. Yet, there is a warmth and rawness to her portrayal of Fern that is unlike any performance she’s ever given. McDormand fully carries the story with her watchful eyes and wry smile, playing a woman who is grieving but is nonetheless curious about people and the world around her.

If SAG voters are as dazzled by McDormand’s work in “Nomadland” as the critics, they might just give her a fifth trophy. It would be her third individual SAG win for film, which would tie her with last year’s winner of this category, Renée Zellweger, for the most individual SAG wins for an actress in the film categories.