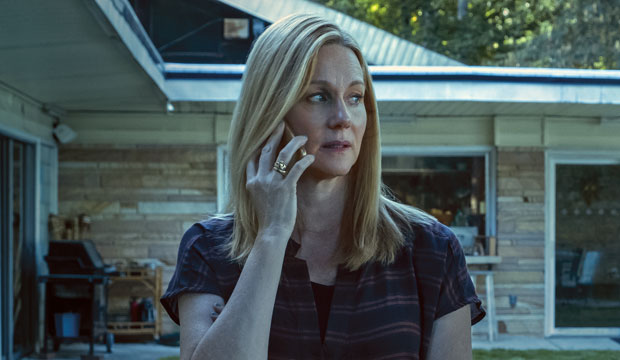 Three seasons in, Laura Linney still hasn’t bagged a single piece of awards hardware for playing Wendy Byrde on “Ozark.” But the tide might finally turn at this year’s Screen Actors Guild Awards, where the actress racked up two nominations: one as a member of the Netflix series’s ensemble cast and one individually in the TV drama actress race. These are the eighth and ninth overall bids for the actress, who looks to scare up her second career victory.

Linney is up against four fellow Netflix actresses: her “Ozark” co-star Julia Garner and three women from “The Crown,” Gillian Anderson, Olivia Colman and Emma Corrin. Of her category counterparts, only Anderson has won individually, having nabbed consecutive prizes for “The X-Files” in this race in 1997 and 1998. Colman has one victory under her belt as well as a part of “The Crown’s” ensemble, which won just last year. The only two without any wins thus far are Corrin and Garner, the former of whom competes for the first time this year, while Garner is now a four-time nominee.

In “Ozark’s” third season, Wendy was more front-and-center than ever before. When her bipolar brother Ben Davis (Tom Pelphrey) turns up, he quickly gets wrapped up in the Byrde family’s criminal affiliation with the Navarro drug cartel, causing … well, nothing but problems. Upon realizing that his disorder poses an interminable threat to her family’s well-being, Wendy is forced to take action, leading to Ben’s tragic demise.

For her work in season three, Linney also reaped Critics Choice, Emmy and Golden Globe Awards citations, and for good reason. When Wendy makes her fateful decision, the actress runs the gamut of emotions as her character is resilient, fearful, angry, panic-stricken, sorrowful — you name it — all at once, which her peers might eat up.

While she doesn’t have to face the person who beat her at the Emmys, Zendaya (“Euphoria”), she does have to battle the one who beat her at Critics Choice and the Globes, Corrin. But even though Corrin won at both events despite being at risk of splitting votes with a co-star (Colman), she might have a harder time overcoming two co-stars at the SAG Awards, especially since Anderson also collected hardware at Critics Choice and the Globes, just in the supporting category (SAG considers lead and supporting actors together in this one race, making it doubly competitive).

SEESAG Awards nominee profile: Josh O’Connor (‘The Crown’) may continue to reign over his rivals as best TV drama actor

A potential vote-split between the three “Crown” ladies could catapult Linney to the top of the category. Granted, she too will have to duke it out with a co-star, but what could give her a leg up over Garner, the two-time reigning Best Drama Supporting Actress Emmy champ (2019-2020), is that Linney has yet to win anything for this show and may be considered overdue, as well as the fact that the SAG Awards often gravitate towards respected veterans over younger stars; consider recent winners in this category like Jessica Lange (“American Horror Story,” 2012), Maggie Smith (“Downton Abbey,” 2014) and Viola Davis (“How to Get Away with Murder,” 2015 and 2016).

Plus, if Linney has an advantage anywhere, it should be at the SAG Awards, which have gotten behind “Ozark” from the get-go. In addition to Linney and the ensemble, SAG has recognized leading man Jason Bateman with three individual noms (2018-2019, 2021), giving him the trophy in 2019. And Garner got her surprise first nom in 2019 when we weren’t even sure she was on the awards radar. There is no better way to recognize the show’s third season than by rewarding Linney, who was so integral to its success.