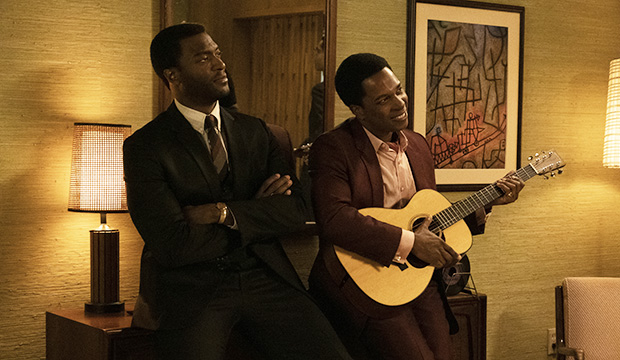 Leslie Odom Jr. gave one of the year’s most inspired performances as soul icon Sam Cooke in Regina King‘s directorial debut “One Night in Miami.” The Amazon film concludes with Odom belting out a spine-tingling rendition of Cooke’s classic Civil Rights anthem “A Change Is Gonna Come,” a tearful climax that puts the actor’s range of talents on full display. For his efforts, Odom is nominated for two Screen Actors Guild Awards in supporting actor and film ensemble.

In the first race, he faces off against Sacha Baron Cohen (“The Trial of the Chicago 7”), Chadwick Bosemna (“Da 5 Bloods”), Daniel Kaluuya (“Judas and the Black Messiah”) and Jared Leto (“The Little Things”). While Odom is a first-time nominee, his competition has all been recognized by their peers before.

Boseman was part of the ensemble-winning “Black Panther” in 2019 and has a record four nominations this year: supporting actor for “Da 5 Bloods,” lead actor for “Ma Rainey’s Black Bottom,” and ensemble for both. Baron Cohen was up for ensemble in 2013 for “Les Miserables” and is also nominated in the same category this year for “Chicago 7.” Kaluuya had a pair of bids in 2018 for “Get Out” for his lead performance and ensemble, and he won alongside Boseman as part of the “Black Panther” cast. Leto took home this very award in 2014 for “Dallas Buyers Club,” which was also nominated for ensemble.

“One Night in Miami” tells of an imagined encounter between four icons at the Hampton House in 1964. Cooke, Jim Brown (Aldis Hodge), Cassius Clay (Eli Goree) and Malcolm X (Kingsley Ben-Adir) meet up to celebrate Clay’s (soon to be Muhammad Ali) heavyweight championship victory, but they quickly dive into serious discussions about the pressures facing successful Black men in America. There is notable tension between Cooke and X, who nearly come to blows when arguing about the singer’s music and impact on culture.

Odom has been singled out with nominations at the Golden Globes, Critics Choice and SAG Awards. The versatile entertainer is on track to earn two Oscar bids for acting and for his original song on the film’s soundtrack, “Speak Now.” He won a Tony Award for Best Actor in a Musical in 2016 for portraying Aaron Burr in “Hamilton” and picked up a Grammy Award for the show’s original cast recording. In 2020, Odom earned his first Emmy nomination for voiceover work on the Apple TV+ animated series “Central Park.”