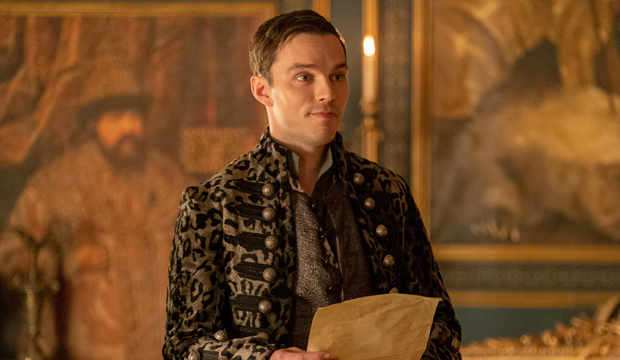 Nicholas Hoult is having the introduction to awards season of a lifetime this year for his performance as Peter III of Russia in Hulu’s “The Great.” So far he earned his first Golden Globes nomination and leveled up his 2003 young actor Critics Choice nomination to one as a comedy lead actor. Though he didn’t triumph in either of those races, his peer group could turn the tables in his direction if they choose to anoint him the new Screen Actors Guild champion in the TV Comedy Actor category.

In order to win his first major prize for “The Great,” Hoult will have to overcome four juggernauts in the field, all of whom are also looking for their first SAG win. Chief among them are the reigning Emmy champs, Eugene Levy and Dan Levy for “Schitt’s Creek.” Neither the father or son Levy won their Globe race this year–Eugene lost there to another SAG nominee, Jason Sudeikis in “Ted Lasso.” And Ramy Youssef is there, too, in the role on “Ramy” he won his own Globe for in 2020. With his four competitors already on the awards books elsewhere for their performances, SAG has an unique opportunity to spread the love to Hoult this time.

As Peter in “The Great,” Hoult has found an opportunity to capitalize on the period piece comedy chops he only barely explored in his supporting role in “The Favourite.” Here he’s a clear lead, sharing screen time with an excellent Elle Fanning as his new wife Catherine the Great. Foul language, ditzy bro banter, and a taste for torture make Peter the kind of comedy villain that is exciting to watch on screen. Hoult’s portrayal takes Peter to every edge of the box and then pushes beyond the boundaries to create a wildly fun and completely off-the-wall character.

Because all five nominees this year are new to the category and haven’t won before, the race is particularly unpredictable. Specifically, the comedy actor category is one that tends toward staleness each year. Last year’s winner, Tony Shalhoub (“The Marvelous Mrs. Maisel”), triumphed two years in a row and just before him William H. Macy noticed three trophies in four years for “Shameless.” Prior to that, Alec Baldwin won seven years in a row for “30 Rock.” To say this category is primed for some new blood would be a massive understatement. What better way to turn a complete 180 than to award Hoult his first big award?

Hoult is also SAG-nominated this year as part of the comedy ensemble of “The Great,” as are the Levys for “Schitt’s Creek” and Sudeikis with “Ted Lasso.” When Shalhoub won in the prior two years, he doubled with ensemble wins for the show as well, but when he wasn’t the show’s only individual nominated like Hoult and Sudeikis are. Shalhoub’s paired wins came in years where “Maisel” was nominated across the board, sweeping him up in a clear swell of overall strength for his show. In that regard, Eugene and Dan might have a leg up here (despite the possibility of them splitting votes) since their female counter parts Catherine O’Hara and Annie Murphy were also nominated for solo awards. Still, precedent is only precedent until it suddenly isn’t, and if there’s any time for Hoult to make his move it is now.