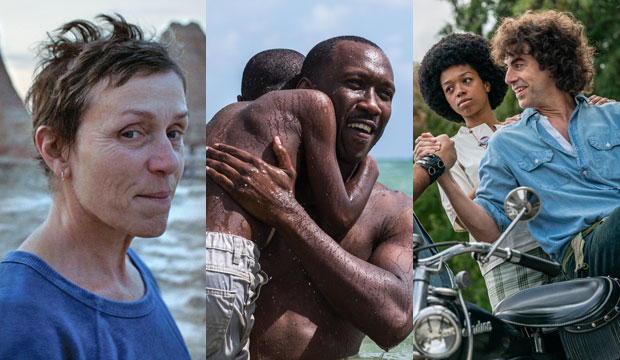 On March 24 the Producers Guild Award went to “Nomadland.” And on April 4 the top Screen Actors Guild Award was bestowed on the ensemble cast of “The Trial of the Chicago 7.” So the Best Picture Oscar race is down to those two films, right? That’s possible, but recent history reminds us not to rule out a surprise from somewhere else: “Moonlight” didn’t win either of those four years ago, but it took home the top Academy Award anyway. And you know what’s starting to look a little like “Moonlight”? “Minari.”

The 2016 awards campaign was dominated by “La La Land.” That movie musical was honored by the Producers Guild, Directors Guild and the BAFTAs — among many other groups. But it wasn’t nominated for its ensemble cast at the SAG Awards. Most pundits didn’t think that mattered much, though, since the movie was mostly a two-hander between on-screen lovebirds Ryan Gosling and Emma Stone, and not really an ensemble movie.

The same is true of “Nomadland,” which is the current Oscar front-runner but wasn’t nominated for the top SAG Award since it primarily centers on Frances McDormand and a collection of nonprofessional actors in supporting roles. “Moonlight” was nominated for its cast at the SAG Awards, but it lost to “Hidden Figures” (just like “Minari” lost to “Chicago 7”). So “Moonlight” ended up falling short at the PGA, DGA, SAG and BAFTA Awards yet still managed to win the Oscar for Best Picture. Similarly, “Minari” fell short at PGA and SAG, it’s not nominated for the top BAFTA, and it’s an underdog at the DGA Awards according to our odds.

Those who believe the Oscar race has now been narrowed down to “Nomadland” and “Chicago 7” might very well be right. The victory for “Nomadland” at the PGA Awards was a big deal: that guild doesn’t usually go for such small-scale indie movies which is a sign of this film’s strength, they’ve agreed with the motion picture academy 10 times in the last 13 years, and they decide their winner using the same preferential ballot that the Oscars use.

Meanwhile, the SAG Awards have previewed major Oscar upsets before: “Shakespeare in Love” over “Saving Private Ryan” (1998), “Crash” over “Brokeback Mountain” (2005) and “Spotlight” over “The Big Short” (2015). But the makeup of the motion picture academy keeps changing with the addition of hundreds of new members every year, including more women and artists from a wider variety of ethnic and national backgrounds. Trying to anticipate how that will shake up the preferential vote is tricky to say the least since the academy is a little different every year.

So take any “the race is over” declarations with a grain of salt between now and Oscar night, including mine — especially mine. “Nomadland” and “The Trial of the Chicago 7” are looking good, but it’s not over until Faye Dunaway announces the wrong winner … and then hopefully the right one.