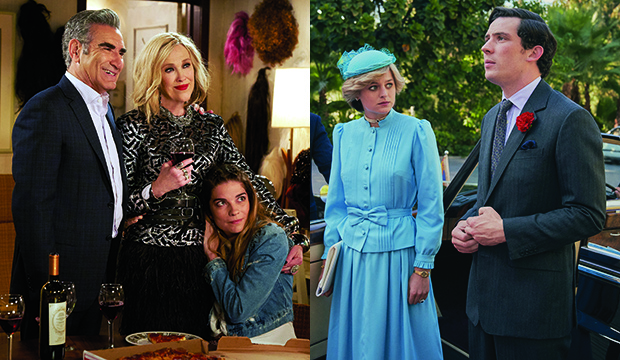 It’s been sweep fever when it comes to TV. “Schitt’s Creek” made history in September as the first show to win all seven comedy categories at the Primetime Emmy Awards. Last month, “The Crown” won all four Golden Globe categories in which it was nominated, including all three drama ones, and then duplicated the quadruple wins at the Critics Choice Awards. Neither show may want to stow away their brooms yet because there’s a very real possibility of both of them sweeping the comedy and drama categories at the Screen Actors Guild Awards, which would mark the first time that’s happened in the same year.

In the SAG Awards’ 26-year history, there have been seven instances of shows winning all of the drama and comedy categories — ensemble, actor and actress — in one year, but never both genres simultaneously. It’s happened five times in drama and just twice in comedy. “ER” first achieved it at the fourth ceremony in 1998 with a drama ensemble victory, along with drama actor and actress wins for Anthony Edwards and Julianna Margulies, respectively. “The Sopranos” and “The West Wing” then each accomplished the feat twice; the former in 2000 and 2008 with stars James Gandolfini and Edie Falco taking the individual categories, and the latter in back-to-back years in 2001 and 2002 with actor and actress honors going to Martin Sheen and Allison Janney, respectively.

All five drama sweeps happened before the first comedy one, which occurred in 2009 with “30 Rock” claiming ensemble, actor for Alec Baldwin and actress for Tina Fey. The NBC comedy came close to repeating the feat multiple times — aided by the fact that Baldwin won his category for seven straight years while Fey earned four individual trophies — but it was foiled in ensemble by “The Office,” “Glee” and “Modern Family.”

Ten years after “30 Rock’s” domination, “The Marvelous Mrs. Maisel” became the second comedy to pull it off when it bagged ensemble, actor for Tony Shalhoub and actress for Rachel Brosnahan in 2019 — after the Amazon hit was completely snubbed by SAG for its first season.

Last year was also the first time “Schitt’s Creek” broke through at the SAG Awards, netting bids in comedy ensemble and actress for Catherine O’Hara. This year, it got five nominations as Annie Murphy joined O’Hara in the single comedy actress category while Eugene Levy and Dan Levy are duking it out in the single comedy actor race. Unsurprisingly, the cast and O’Hara are way out in front to win their categories in the odds.

Where “Schitt’s Creek’s” 3/3 sweep could be spoiled is in the actor category. Jason Sudeikis is favored to win, and it’s hard to bet against him given how big of a hit “Ted Lasso” has become and because he’s trounced the elder Levy in the comedy lead actor races at the Golden Globes and Critics Choice Awards. But SAG-AFTRA voters are creatures of habit, and while neither Levy has won before, their show is older and we only have to look to last year to see a familiar face (Shalhoub) beat the Hot (Priest) “new” guy (“Fleabag’s” Andrew Scott).

On the other hand, “The Crown” leads the odds in all three drama categories. It’s the reigning drama ensemble champ and would be the seventh show to win the award twice. In the wake of his Globe and Critics Choice wins, Josh O’Connor has slid past former champ Jason Bateman (“Ozark”) in the actor race. The actress race is an all-Netflix affair between three “Crown” ladies — Globe and Critics Choice champs Emma Corrin and Gillian Anderson, and Olivia Colman — and “Ozark” stars Laura Linney and Julia Garner. At the moment, Anderson, who has twice won this category for “The X-Files,” is predicted to triumph. This would mirror what Season 1 “Crown” star John Lithgow accomplished in drama actor four years ago: winning the SAG Award for a supporting performance over lead stars with a transformative turn as a former British Prime Minister. Like Anderson, Lithgow was also a prior SAG Awards champ with two wins in comedy actor for “3rd Rock From the Sun.”

The same year Lithgow prevailed for “The Crown,” Claire Foy, the show’s first Queen Elizabeth II portrayer, took home the drama actress prize, but the cast of “The Crown” fell short in the ensemble category to “Stranger Things.”

Yeah, the idea of two shows winning six of the SAG Awards’ eight TV acting categories isn’t very exciting, especially on the heels of their earlier sweeps this season (unless you’re “Schitt’s Creek” and “The Crown” stans), but in a pandemic year, maybe voters just can’t help turning to old favorites.

PREDICTthe 2021 SAG Awards winners through March 30
SAG Awards odds for Best TV Drama Ensemble
Can 'The Crown' make it two in a row?