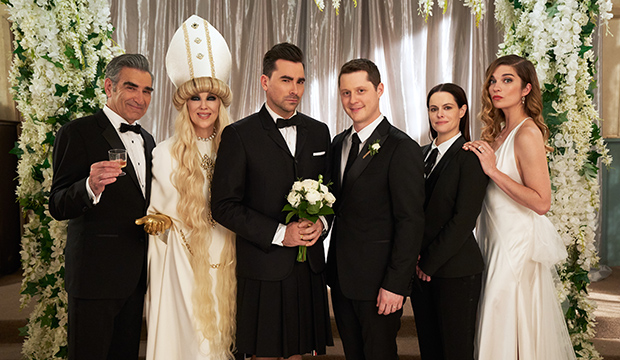 “Schitt’s Creek” may be known for the core four Rose family, but no less than 10 cast members make up the show’s bid for Best TV Comedy Ensemble at the 2021 SAG Awards. They are: Chris Elliott, Emily Hampshire, Sarah Levy, Noah Reid, Jennifer Robertson and Karen Robinson, plus individual nominees Eugene Levy, Catherine O’Hara, Dan Levy and Annie Murphy. That’s right — Pop TV’s departing series earned a whopping five total nominations at the Screen Actors Guild, more than any other comedy and tied with “The Crown” in drama.

The father-son Levy duo are nominated for Best TV Comedy Actor alongside Nicholas Hoult (“The Great”), Jason Sudeikis (“Ted Lasso”) and Ramy Youssef (“Ramy”). Youssef is a first time SAG nominee, while Hoult and Sudeikis are also first-timers but also contend in Comedy Ensemble for their respective series. Both Levys competed in the cast race last year, but are brand new to the individual category.

Meanwhile, both O’Hara and Murphy are nominated for Best TV Comedy Actress alongside Christina Applegate (“Dead to Me”), Linda Cardellini (“Dead to Me”) and Kaley Cuoco (“The Flight Attendant”). All of these women are also nominated this year as part of their ensembles. While Murphy is up for her first individual bid, O’Hara previously lost this same category to Phoebe Waller-Bridge (“Fleabag”) as well as the movie/mini race to her “Temple Grandin” co-star Claire Danes.