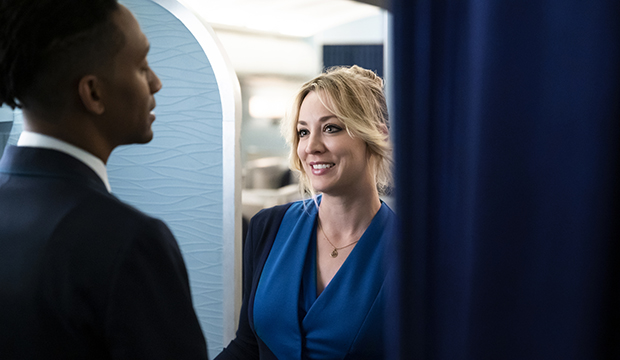 The show centers around Cassie Bowden (Cuoco), a brash airline employee who’s much too comfortable drinking while working and hooking up with strangers that include the passengers she’s supposed to be assisting. Her world gets turned upside down when she hooks up with a charming passenger flying to Bangkok but wakes up the following morning to find that he’s been brutally murdered. As she makes several mistakes in an attempt to clear her name, she also gets drawn deeper into the seedy life of the deceased man while also being forced to confront her reckless nature and how it affects her friends and family.

Cuoco already has quite a history at the SAG Awards having been nominated in this category for six consecutive years as part of the ensemble of “The Big Bang Theory” from 2011-2016. As part of the cast of “Grey’s Anatomy,” Knight earned nominations for TV Drama Ensemble in 2006 and 2008 and won as a part of the cast in 2007. Huisman earned two previous noms in the TV Drama Ensemble category for his work on “Game of Thrones” from 2016-2017 and Serpico was one of the first recipients of the Stunt Ensemble in a Film award in 2007 for his stunt work in “The Bourne Ultimatum.”

While a show that blends aspects of comedy, drama, mystery and action might seem to be a bit of a reach for a top award at some ceremonies, a win for the show at SAG would actually be in keeping with recent trends that we’ve seen there. Genre-mixing shows that didn’t adhere to what was normally thought of as comedic television, including “Ally McBeal,” “Glee,” “Desperate Housewives” and “Orange is the New Black,” have all managed to win this prize in the past. In order to pull this off, “The Flight Attendant” is going to have to beat back some serious competition. Among its competitors are two other shows being recognized for their first season (“Ted Lasso” and “The Great”), a first-time nominee up for its second season (“Dead to Me”) and a nominee from last year that’s racked up major wins at both the Emmys and the Golden Globes (“Schitt’s Creek”).