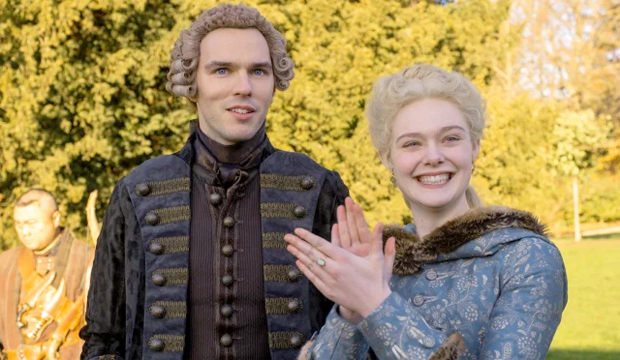 Hear me out: if you take the political incorrectness of “Veep” and combine it with the effervescent twist on period piece television of “The Marvelous Mrs. Maisel” then what you get is “The Great.” And when you think about Hulu’s latest acclaimed series in that way, then it makes it all the more likely that it could actually win this year’s Screen Actors Guild Award for Best TV Comedy Ensemble.

“Maisel” is the two-time reigning champ for this award, having claimed the prize from “Veep” after it finally won in 2018. If SAG voters are still itching for the bubbly humor of “Maisel,” but also longing for the political scheming of imbeciles from “Veep” then they very well might choose “The Great” to win this year. They’d have to pick it over two shows they liked more individual performances from though: “Dead to Me” also earned two nominations in comedy actress and “Schitt’s Creek” earned four other nominations between the comedy actor and actress fields. The other two ensemble nominees are “Ted Lasso” and “The Flight Attendant,” both of which earned a single nomination elsewhere just like “The Great.”

That single other nomination for “The Great” went to Nicholas Hoult as Peter III of Russia. As Peter, Hoult plays a ruthless, ultra-bro version of the six-month reigning emperor who married and then was later deposed by Catherine the Great (Elle Fanning). Hoult and Fanning lead the 14-actor ensemble nominated here, the other 12 of whom mostly make up the pair’s royal court. Nominee Sacha Dhawan is one particular stand out among the cast as Count Orlo, who comes to find out early on that he shares Catherine’s goal of enriching the empire of Russia with education, opposing Peter’s view of maintaining a separation and unequal distribution of power between the genders.

When it comes to past comedy ensemble winners, “The Great” falls pretty much in line with most as a mid-sized cast. The outliers among the winners are the larger winners, like that stretch of wins “Orange Is the New Black” for three years or when “Glee” won in 2010 with 19 nominees. Both “The Great” and “The Flight Attendant” top this year’s field with 14 names on their nominated rosters, while “Ted Lasso” has 11, “Schitt’s Creek” has 10, and “Dead to Me” has only 8. The smallest cast nominated hasn’t won the category since “Sex and the City” in 2004.

Taking place in the distant past of the 1700s, “The Great” is an anomaly among the shows nominated here before, but also among all comedic shows we know. The royal period piece is a genre we think of occupying the drama field much more often because of shows like “Downton Abbey” and “The Crown.” But “The Great” turns that genre on its head with satire and sexual humor more akin to the film “The Favourite” than anything else. That film we know went on to win multiple Oscars, and SAG members love television as much as they do film so can we expect them to make “The Great” their new favourite?