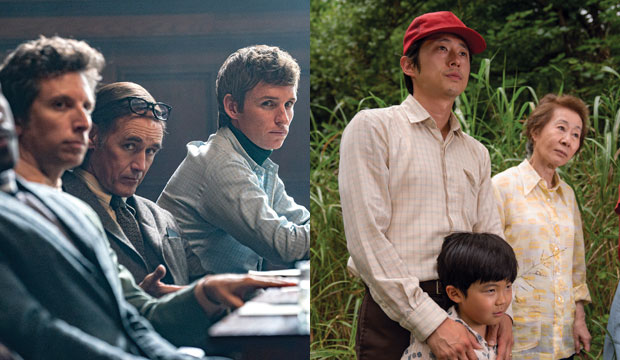 It looks like the SAG Award for best film ensemble is a two-way race between “Minari” and “The Trial of the Chicago 7.” That’s according to the combined predictions of Gold Derby users. But which film  has the advantage depends on which of our users you ask.

The Expert journalists we’ve surveyed from major media outlets say “Trial” is out front: 11 of them are betting on the fact-based Aaron Sorkin film, compared to six who say “Minari” will prevail. It’s a righteous film about the fight for justice with a big cast of film and TV alums like past SAG champs “Argo” (2012) and “Spotlight” (2015), both of which went on to win the Oscar for Best Picture.

But the Editors who cover awards year-round for Gold Derby think “Minari” will win: eight of us say Lee Isaac Chung‘s semiautobiographical story of a Korean-American family starting a farm in Arkansas is the front-runner, while two predict “Trial of the Chicago 7.” There’s precedent for this too: “Minari” is a story about close-knit family bonds, like “Little Miss Sunshine” (2006) and “Parasite” (2019).

SEE‘Minari’ still has a path to win Best Picture at 2021 Oscars, despite that eyebrow-raising editing snub

Even our top users are divided. The Top 24 Users who got the highest scores predicting last year’s SAG winners give the very slight edge to “Trial” with 12 forecasting that film compared to 11 forecasting “Minari.” But the All-Star Top 24 who got the highest prediction scores when you combine the last couple of years’ results are the other way around: 14 say “Minari,” 9 say “Trial.”

Maybe all of the above are wrong, though. “Ma Rainey’s Black Bottom” is predicted to upset by one of our Experts, one Top User and one All-Star, while another Expert is currently going out on a limb for “One Night in Miami.” Rounding out the category is “Da 5 Bloods,” which you can’t rule out since it has the largest nominated cast with 15 performers on its list (“Trial” has 10, and “Minari” only has seven). But with Oscar front-runner “Nomadland” not nominated for its cast, if we’re right that “Minari” or “Trial” will win, that may very well set it up as the Best Picture dark horse.