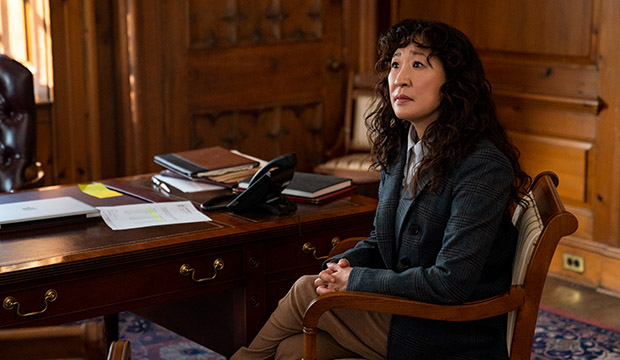 From the California wine country to Seattle Grace and the UK’s MI-6, Sandra Oh has earned Screen Actors Guild Awards for a variety of her memorable roles in both film and television. Now, she could add “New England English professor and department chair” to her list of SAG-nominated roles if she makes the cut for the freshman Netflix comedy series “The Chair.”

Oh, who plays of Professor Ji-Yoon Kim, an Emily Dickinson scholar who ascends the ranks of her English department to become its first female chair, currently sits in third place in our combined SAG TV odds, trailing only Jean Smart (“Hacks”) and Hannah Waddingham (“Ted Lasso”), who both just took home Emmy Awards for their respective roles. She leads Elle Fanning (“The Great”) and Issa Rae (“Insecure”), who round out our five predicted nominees in the TV Comedy Actress category.

Oh has a storied history at the SAG Awards with wins in both TV and film categories with four wins in six nominations. She earned her first nomination and victory for the 2004 movie “Sideways,” which won the top film ensemble prize in 2005. Just one year later, Oh won an individual SAG for “Grey’s Anatomy.” The medical drama’s ensemble earned three nominations and won once in 2007. She most recently won in 2019 for “Killing Eve,” but she was snubbed for a nomination the following year in favor of her co-star Jodie Comer. With “Killing Eve” on an extended hiatus due to production delays related to the coronavirus pandemic, Oh will look to extend her SAG nominations tally to a lucky number seven for “The Chair,” which would be her first bid for a comedy series.

One advantage Oh has in the race is the SAG-AFTRA members’ affinity for Netflix. In 2013, when Netflix first became eligible for TV awards, it earned two comedy nominations for “Arrested Development” and Jason Bateman. The following year, the streamer picked up its first two trophies for “Orange Is the New Black” and its star Uzo Aduba; both won again at next ceremony, and “Orange” won three ensemble prizes in all. Netflix has had particular success in the comedy actress category: in 2017, it had four of the five slots for Aduba, “Grace and Frankie” stars Jane Fonda and Lily Tomlin, and Ellie Kemper (“Unbreakable Kimmy Schmidt”). The same happened in 2018 with Alison Brie (“GLOW”) replacing Kemper. Even though it hasn’t dominated quite like that since, it has managed to hold onto one or two slots, thanks to “Dead to Me” stars Christina Applegate and Linda Cardellini. With “Dead to Me” ineligible this year, Oh could easily take over one of those vacancies.

While these stars are certainly aligning for Oh, she does have some competition for the nomination. Selena Gomez (“Only Murders in the Building”) sits just one place outside of our top five and could easily upset one of our predicted nominees; the Hulu series has done huge numbers for the streamer and the recency of its airdate could help her bump Oh. If actors really fell in love with the industry satire “Hacks,” they could also vote for Smart’s Emmy-nominated co-star Hannah Einbinder, who might squeeze Oh out, too. “Hacks” and “Only Murders” will likely score ensemble bids, which could help its stars secure these individual nominations; in comparison, “The Chair” trails in a distant 12th place in the comedy ensemble race.

What should help Oh stay the course all the way through nominations morning is the richness of her role on “The Chair.” What could feel like a generic workplace sitcom that just happens to be set in a university actually tries to explore some of the issues of contemporary academia — including the lack of diversity amongst its tenured professorate and low student engagement — and Oh handles the series’ multiple plots incredibly well. She plays off of veterans Holland Taylor, Bob Balaban, Jay Duplass and David Morse in such different ways, and shines opposite two of the shows other MVPs, Nana Mensah as a promising new scholar and Everly Carganilla as Oh’s adopted daughter. Oh’s family scenes with Carganilla and Ji-yong Lee as Oh’s father have such incredible heart, which will likely distinguish her performance from the other contenders in more strictly comedic fare.