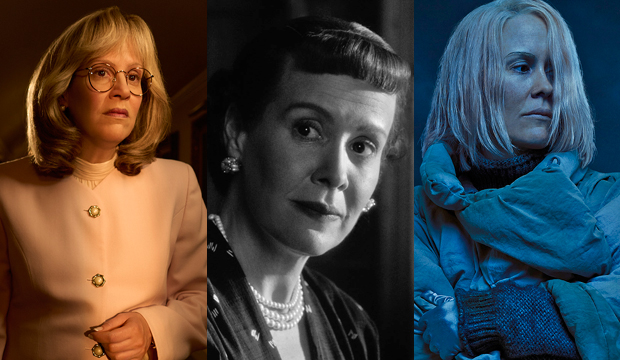 In 2016, Sarah Paulson earned double nominations at both the Emmys and Critics Choice Awards for her leading role as Marcia Clark on “The People v. O.J. Simpson: American Crime Story” (which she won) and her supporting turns as Sally McKenna & Billie Dean Howard on “American Horror Story: Hotel.” Now, history could repeat itself this 2022 awards season as the actress is once again in the running for both of Ryan Murphy‘s FX programs. On “Impeachment: ACS” she plays Linda Tripp and on “AHS: Double Feature” she portrays Mamie Eisenhower & Tuberculosis Karen.

Paulson is receiving some of the best reviews of her career for “Impeachment,” in which she sinks her teeth into the infamous former White House secretary who publicly exposes the affair between President Bill Clinton (Clive Owen) and intern Monica Lewinsky (Beanie Feldstein). The Los Angeles Times raves, “Sarah Paulson does a phenomenal job portraying Linda Tripp.” The New York Times writes that she “strives mightily” and “gives an acute performance.” And TVLine notes how Paulson is “unrecognizable” as she takes on one of the most “unlikable TV characters in recent memory.”

“Impeachment” is based on Jeffrey Toobin‘s book “A Vast Conspiracy: The Real Story of the Sex Scandal That Nearly Brought Down a President.” The highly anticipated project was first announced in 2017, only to be scrapped. It was resuscitated soon after when the real-life Lewinksy signed on to be a producer. The show finally premiered September 7 on FX after being delayed once again due to the Covid-19 pandemic. This marks the third “American Crime Story” installment following “The People v. O. J. Simpson” (2016) and “The Assassination of Gianni Versace” (2018), both of which won multiple awards including Emmys for Best Limited Series.

The 10th season of “American Horror Story” is subtitled “Double Feature” because it tells two distinct stories: “Red Tide,” about a New England town filled with monsters, and “Death Valley,” about alien abductions in the 1950s and the present day. Paulson plays one of the sole sympathetic characters in Part 1 (that is, if you ignore the baby-stealing), as TB Karen rallies against taking the talent-increasing black pills that cause monstrous results. Much of her screen time is with “AHS” newcomer Macaulay Culkin, with whom she has a contentious friendship. Not much is known yet about her Part 2 character, First Lady Mamie Eisenhower, except for the fact that she’s supportive of her husband, President Dwight D. Eisenhower (Neal McDonough), in his quest to learn more about the otherworldly visitors.

At the Emmys and Critics Choice Awards, Paulson will likely be submitted in the Best Limited Series Actress race for “Impeachment” and the Best Limited Series Supporting Actress category for “Double Feature.” As for the Screen Actors Guild Awards, they do not distinguish between leads and supportings for television. You can already make your 2022 SAG Awards predictions at Gold Derby.