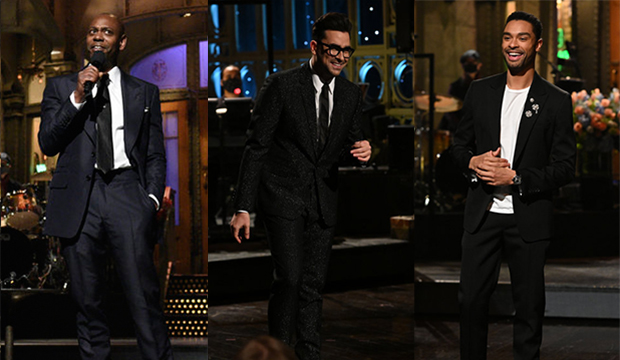 “Saturday Night Live” has been a mainstay in Best Comedy Guest Actor at the Emmys for the better part of a decade. Since 2013, the long-running sketch series has scored at least two nominations in this category every year, no matter how large or small the category. Last year “SNL” secured three nominations in a field of six while the previous year it earned four in a field of seven. Now, there is a chance that the NBC series could dominate the category this year as few other shows have ever done before.

“SNL” submitted eight actors for Emmy consideration in Best Comedy Guest Actor. Six were guest hosts this season: Dave Chappelle, Daniel Kaluuya, Dan Levy, John Mulaney, Rege-Jean Page and Chris Rock. Chappelle won an Emmy in 2017 for his previous hosting stint while Mulaney earned a nomination for one of his hosted episodes in 2019. The other two submitted men are Alec Baldwin and Jim Carrey, who played Donald Trump and Joe Biden, respectively, in the first six episodes of the season. Baldwin won a Best Comedy Supporting Actor Emmy in 2017 for playing the former president.

Gold Derby Experts, editors and users are expecting “SNL” to take full command of Best Comedy Guest Actor. Due to the number of submissions, the category will have five slots this year and odds are suggesting that four of them will be taken up by “SNL” guest hosts. Chappelle is in the pole position with 17/5 odds of a nomination, which is logical considering the comedian has racked up four Emmy wins since 2017. Levy, who won four Emmys last year for “Schitt’s Creek,” is right behind Chappelle with 5/1 odds. Page and Rock are currently in fourth and fifth, respectively, behind “Ted Lasso” guest star Anthony Head in third. As for the other four submitted actors, Kaluuya has a fighting chance in eighth place, while Carrey and Baldwin are paired together at 10th and 11th, respectively. Mulaney is all the way down in 14th despite that previous nomination.

What will help “SNL” immensely this year is a lack of eligible competition. Every single show it has faced before in this category either ended (“Veep,” “Modern Family”) or did not air new episodes this season (“The Marvelous Mrs. Maisel,” “Atlanta”). Emmy voters will be faced with a flurry of new shows and it is hard to tell how they will respond to them, while “SNL” is a safe bet full of recognizable names. It would be a shock if “SNL” were to lose its stranglehold on this category, but if the show underperforms on nomination morning, it could be a sign of fatigue with the established shows and a desire to recognize what’s new and fresh.