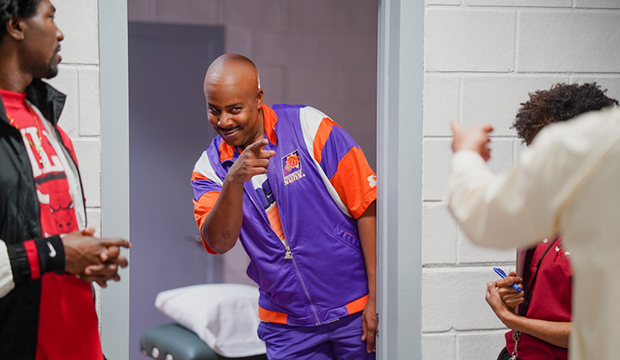 There are times when it feels like Kenan Thompson has always been on “Saturday Night Live.” The actor and comedian is the longest-tenured cast member in the sketch show’s celebrated history, having joined the series in 2003 after a successful run on shows like Nickelodeon’s “All That” and “Kenan & Kel,” in addition to a fan-favorite role in the popular “Mighty Ducks” trilogy. Although he’s been nominated twice for the Best Comedy Supporting Actor Emmy for the show, he’s lost both times, first to Henry Winkler for “Barry” in 2018 and then Dan Levy for “Schitt’s Creek” last year. As Thompson is the only actor from 2020’s supporting comedy race who could possibly return this year, and following speculation that this might have been his final season on “Saturday Night Live,” we have to ask: Could this finally be Thompson’s year?

If we consider the rumor that started after the Season 46 finale on May 22 that several of “SNL’s” beloved cast members are departing the show, Thompson, who won an Emmy in 2018 for Best Original Music and Lyrics for “SNL,” could probably ride the sentimental “this is the last chance to recognize him” wave all the way to the Emmys stage. But he told Variety earlier this year that he isn’t planning on leaving just yet, noting that he would “love to get to” 20 seasons. So it seems unlikely he’s changed his mind since then. Plus, he also doesn’t appear to need an extra push to potentially get him to the finish line. Thompson is currently in first place in Gold Derby’s combined supporting comedy actor odds, with 13 Experts predicting him to triumph, and he’s been holding court there for a little while now.

As it stands, Thompson leads Bowen Yang (“SNL”), Brett Goldstein (“Ted Lasso”), Michiel Huisman (“The Flight Attendant”), Brendan Hunt (“Ted Lasso”), Alex Newell (“Zoey’s Extraordinary Playlist”), Ray Romano (“Made for Love”) and T.R. Knight (“The Flight Attendant”) in a fairly open race. While it’s not hard to believe that multiple actors from Apple TV+’s “Ted Lasso” could make it in — the success of shows like “Game of Thrones” and ”Succession” have proven that voters have no qualms about laying on the love for actors from shows they really care about when they have a ballot with unlimited slots — they might split the vote unless there is a runaway favorite, thus opening up a clearer path for Thompson to become the latest “SNL” actor to walk away a winner. And it would be a huge win for him and for the show.

The last repertory cast member to claim victory at the Emmys was Kate McKinnon, who won Best Comedy Supporting Actress back to back in 2016 and 2017. To date, she is the only person to have been honored twice for their performance. Meanwhile, only three other cast members in the entire history of “Saturday Night Live” have ever won an Emmy for their work: Chevy Chase (1976), Gilda Radnor (1978) and Dana Carvey (1993), all of whom won the now-defunct variety performer category. Alec Baldwin took home Best Comedy Supporting Actor in 2017 for his frequent impressions of then-President Donald Trump, but he has never been a cast member. (It should be noted that several people have won in the guest acting categories for primarily hosting “SNL.”)

But as exciting as a comedy supporting actor nomination would be, it’s actually not Thompson’s only shot at winning an Emmy this year. Many are also predicting him to score a bid in comedy lead actor as well for his performance on his NBC comedy “Kenan.” He’s currently sitting in fourth place behind Jason Sudeikis (“Ted Lasso”), Michael Douglas (“The Kominsky Method”) and Anthony Anderson (“Black-ish”). Given Sudeikis’ recent run of success at awards shows, it seems less likely that Thompson will succeed in this particular category. But hey, two chances at Emmy gold are still better than just one.