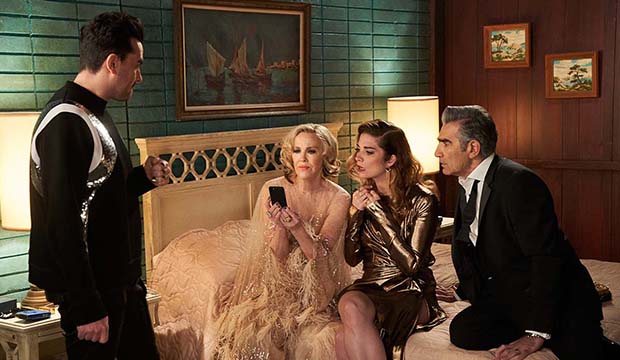 Everything continues to come up Roses. After scoring five Screen Actors Guild nominations on Thursday, the most of any comedy series, “Schitt’s Creek” is poised to pull off another sweep after making history by walking away with every single comedy category at the Emmys last fall.

The Canadian comedy received a repeat nomination for comedy ensemble and individual acting nominations for all four principal actors: Catherine O’Hara (the only cast member to receive a nom last year), Eugene Levy, Dan Levy and Annie Murphy. Because the SAG Awards do not distinguish between lead and supporting performances the way other awards shows do, O’Hara and Murphy are pitted against one another for comedy actress, while father and son, who co-created the show together, will compete in the comedy actor category.

While this situation could potentially split votes, it is probably a bit more accurate this way, at least when it comes to the men. Dan Levy’s David Rose was much more than a supporting role in the show’s sixth and final season (and probably even before), and it feels a bit like category fraud to see him in the supporting race everywhere else, even if the way the actors have been submitted for other awards is understandably strategic.

Despite competing against one another, the cast of “Schitt’s Creek” could very well win all the comedy categories (and could potentially do it at the Golden Globes as well). If the Pop TV show is successful, it will become just the third comedy series to go 3 for 3 at the SAG Awards. The first comedy to take home all three awards was NBC’s “30 Rock,” which did so in 2009 after stars Alec Baldwin and Tina Fey took home the individual acting awards while the series won ensemble. Amazon’s period comedy “The Marvelous Mrs. Maisel” came along a decade later and did the same thing, scoring awards for ensemble, actress for lead Rachel Brosnahan and actor for supporting player Tony Shalhoub. (One the drama side, five series have gone three for three. Apparently it’s a lot easier to sweep when you’re being dramatic.)

In addition to simply having the momentum in their favor, the “Schitt’s Creek” cast should also feel pretty good going into the April 4 ceremony knowing that reigning two-time champ “Maisel” isn’t eligible this year. SAG-AFTRA voters are pretty big on rubber-stamping, but this year they’ll be forced to award something new, and “Schitt’s Creek” has a pretty decent shot at knocking down the competition for ensemble, which includes Netflix’s “Dead to Me,” HBO Max’s “The Flight Attendant,” Hulu’s “The Great” and Apple TV+’s “Ted Lasso.”

SEE ‘The Crown’ and ‘Schitt’s Creek’ dominate SAG Awards nominations, as everyone knew they would

O’Hara and Murphy are up against Kaley Cuoco (“The Flight Attendant”) and another pair of co-stars, “Dead to Me’s” Christina Applegate and Linda Cardellini. The Levys will face Nicholas Hoult (“The Great”), Ramy Youssef (“Ramy”) and Jason Sudeikis (“Ted Lasso”), the last of whom will probably put up the strongest fight in preventing a “Schitt’s” sweep as the star and co-creator of the breakout hit. However, last year, incumbent champ “Maisel” was still able to take down the “it” show of the moment, “Fleabag,” in two of the three categories, so “Schitt’s Creek,” an older show and former nominee that we know is beloved in the industry, still has an edge.

So if you thought “Schitt’s Creek” sweeping the Emmys was wild, just imagine the mark the comedy, which was ignored by pretty much everyone for its first four seasons, will inevitably leave if it sweeps not only the SAG Awards, but also the upcoming Golden Globes. Love that journey for the Roses.