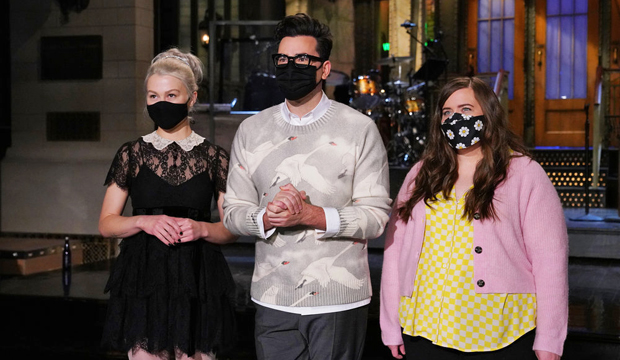 Last year Dan Levy won four — yes, four! — Emmy Awards for producing, writing, directing and acting in “Schitt’s Creek.” Now the 37-year-old multi-hyphenate is back in the Emmy rotation again thanks to his hosting gig on “Saturday Night Live,” for which he earned his first nomination in the Best Comedy Guest Actor category. Might residual love for Pop TV’s dearly departed comedy series push Levy back into the Emmy winner’s circle for “SNL”?

Levy hosted the February 6 episode of the NBC late-night staple with musical guest Phoebe Bridgers. His father, Eugene Levy, appeared in his opening monologue (in a plastic box) when he walked around the iconic “SNL” set to show the audience all of the new Covid-19 safety protocols. The young Levy explained how there’s both good and bad things that came with the rising popularity of his show. Sure, “Schitt’s Creek” made him a household name, but now he’ll never get used to people shouting “Ew, David” at him.

Some of the sketches from Levy’s episode included a Super Bowl Pre-Game show and party, a jittery Universal Studios Tour, a wedding that’s interrupted by objectors, and a commercial for Zillow (watch below) that subsequently went viral because of its sultry tone.

Once again, “Saturday Night Live” is one of the most nominated programs of the year, earning 21 total Emmy nominations including Best Variety Sketch Series. If it wins the top trophy again this year (its only competition is “A Black Lady Sketch Show”), that’ll be its seventh series prize out of 46 seasons.

In the guest actor category, Levy faces off against fellow “SNL” stars Alec Baldwin, Dave Chappelle and Daniel Kaluuya, plus Morgan Freeman of “The Kominsky Method.” Levy, Baldwin and Chappelle have taken home Emmy Awards before in their careers, while Kaluuya and Freeman are hoping to hear their names called for the first time. According to Gold Derby predictions, Levy is in third place to win the trophy for hosting “SNL,” behind both Chappelle and Freeman.