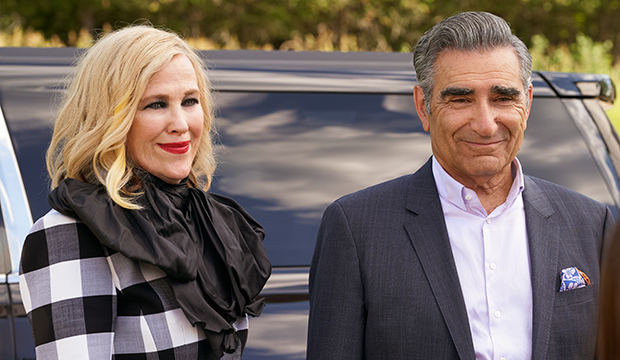 “Schitt’s Creek” is the runaway favorite to win the Best Comedy/Musical Series Golden Globe, according to our odds, but it may have its work cut out for it — and not just because it’s never been nominated for a single Globe before. A victory would make the Emmy champ the oldest show to win the category in 30 years.

We’re talking “old” as in seasons here. “Schitt’s” is competing for its sixth and final season, already putting it at a slight disadvantage at the Globes, given the Hollywood Foreign Press Association’s obsession with all things shiny and new. Since the category was established 51 years ago, the award has overwhelmingly gone to shows early in their runs, typically within their first two seasons.

SEE Strange, but true: Catherine O’Hara has never been nominated at the Golden Globes

Since then, the oldest to win were “Roseanne” and “Seinfeld” in 1993 and ’94, respectively, both for the second halves of their fourth seasons and the first half of their fifth seasons. “Sex and the City’s” fourth season triumphed in 2002, which was also the last of its three straight Globes. In the last eight years, six shows prevailed for their first seasons (“Girls,” “Brooklyn Nine-Nine,” “Transparent,” “Atlanta,” “The Marvelous Mrs. Maisel” and “The Kominsky Method”), and the other two, “Mozart in the Jungle” and “Fleabag,” won for their second (and last in the latter’s case). If “Schitt’s” pulls it out, it’d be the first comedy to win for a sixth season.

But being old(er) is not entirely insurmountable at the Globes in recent history. The Roses can look to the drama side, where in the last decade the HFPA has awarded “Breaking Bad” (second part of Season 5) and “The Americans” (Season 6) for their respective final seasons. Like “Schitt’s,” they came off of well-received, buzzy (to varying degrees) last seasons and multiple Emmys wins, and neither had ever won a Globe before. “Breaking Bad” scored Globes for Best Drama Series and Best TV Drama Actor for Bryan Cranston, while “The Americans” just snatched the series prize. The key difference is that “Breaking Bad” and “The Americans” had been nominated for multiple Globes prior to their last-minute victories.

“Schitt’s” is easily the oldest series of the top comedy contenders. “The Great,” which is in second in our odds, and “Ted Lasso,” in fourth, are first-year shows. In third place is “Ramy,” which is competing for its second season, as is No. 5 “What We Do in the Shadows.” You have to go to the 13th slot to find a show at least as old as “Schitt’s”: “Black-ish,” currently in its seventh season.

So yeah, the numbers are not exactly on “Schitt’s” side here, but it’s already defied so many expectations over its run and made Emmy history with its 7/7 sweep, so maybe it can rewrite the Globe record books as well. Love that journey for it.