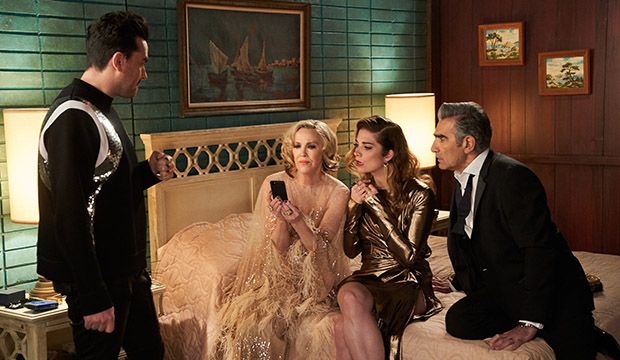 After being the first show to win all seven comedy categories at the Emmys, “Schitt’s Creek” has made history of a different kind at the Golden Globes. The Pop TV hit won Best Comedy/Musical Series on Sunday, becoming the oldest show in 30 years to snatch the award.

“Schitt’s Creek” prevailed with its sixth and final season — an incredible feat not just because the Hollywood Foreign Press Association favors brand new toys but because the show had never even been nominated for a Globe until this year, when it earned five bids.

The oldest champs since then were “Roseanne” and “Seinfeld” in 1993 and ’94, respectively, both for the second halves of their fourth seasons and the first half of their fifth seasons. “Sex and the City’s” fourth season prevailed in 2002, which was also the last of its three straight Globes. In the last eight years, six shows prevailed for their first seasons (“Girls,” “Brooklyn Nine-Nine,” “Transparent,” “Atlanta,” “The Marvelous Mrs. Maisel” and “The Kominsky Method”), and the other two, “Mozart in the Jungle” and “Fleabag,” won for their second (and last in the latter’s case). “Schitt’s Creek” is the first comedy to win for a sixth season.

The nine-time Emmy champ is also the third show in the last decade to win its first series Globe for a final season — a sort of “better late than never” catch-up. The HFPA awarded “Breaking Bad” (second part of Season 5) in 2014 and “The Americans” (Season 6) in 2019 for their respective final seasons, which, like “Schitt’s Creek’s” final installment, were acclaimed and buzzy (to varying degrees) and earned multiple Emmys. “Breaking Bad” collected Globes for Best Drama Series and Best TV Drama Actor for Bryan Cranston, while “The Americans” just won the series prize. The only difference is that “Breaking Bad” and “The Americans” were nominated for multiple Globes prior to their last-minute victories.