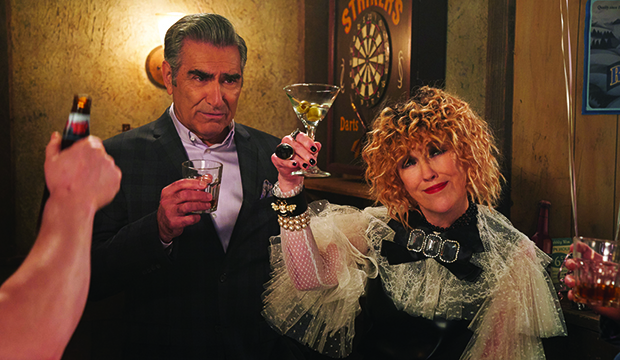 “Schitt’s Creek‘s” farewell tour will conclude at the Screen Actors Guild Awards, airing April 4, where the Emmy sweeper has five nominations for comedy ensemble and individually for Catherine O’Hara, Eugene Levy, Dan Levy and Annie Murphy. It’s the runaway favorite in the odds to claim the comedy ensemble prize, and if the Roses & Co. triumph, the Pop TV hit will be the first show to win the category for its entire final season.

“Entire” is key here. Because SAG uses a calendar-year eligibility period, it doesn’t correlate with the typical broadcast season, which runs from September to May. That means broadcast shows win for the second half of their previous season and the first half of the then-current one at the time of the awards (or just the first half of the first season if you’re a new show). “Seinfeld” snagged the last of its three comedy ensemble awards in 1998 for the second half of its eighth season and the first half of its ninth and final season. It was not nominated the following year for the remainder of its ninth installment.

Then you have cases like “Sex and the City.” The HBO smash helped usher in the now popular and savvy cable and streaming habit of splitting final seasons into two parts to air in different cycles. A two-time ensemble champ, the “Sex and the City” cast nabbed their second statuette in 2004 for Part 1 of the show’s sixth and final season. They actually won on the same night, Feb. 22, 2004, that the “Sex and the City” series finale aired. They were nominated for Part 2 the following year but lost to the cast of the breakout first season of “Desperate Housewives.” (Conversely, on the drama side, “The Sopranos” and “Breaking Bad” both lost drama ensemble for Part 1 of their respective final seasons but won for Part 2.)

Most comedy ensemble champs win for their early or middle seasons, like “Modern Family,” which scored a record four consecutive wins from the middle of its second season through the middle of its fifth. “Seinfeld” was already in its sixth season by the time the inaugural SAG Awards were held in 1995, so its triple wins were for the back half of its run. Last year, “Fleabag” was widely predicted to win ensemble for its second and final season, but it failed to dethrone reigning champ “The Marvelous Mrs. Maisel,” which prevailed for its third installment.

“Schitt’s Creek” aired its sixth and final season from January to April 2020, so no split-season funny business going on here. After its historic sweep of all seven comedy categories at the Emmys, “Schitt’s Creek” hasn’t been quite as successful at the winter awards; it “only” won two Golden Globes, Best Comedy/Musical Series and Best TV Comedy/Musical Actress for O’Hara, and two at the Critics Choice Awards, for O’Hara and Dan Levy.

Barring any ties, it can only win a max of three at SAG since SAG doesn’t have supporting TV categories. Besides ensemble, O’Hara is also predicted to win comedy actress. Even with “Ted Lasso” coming on strong — Jason Sudeikis has won everything this year and is the favorite in comedy actor — the “Schitt’s” crew should be able to pull out the ensemble victory. The show already broke through last year with nominations in ensemble and for O’Hara, and this is the last chance voters can award it.

In second place in the odds is “Ted Lasso,” followed by “The Flight Attendant,” “Dead to Me” and “The Great.” All four are first-time nominees.