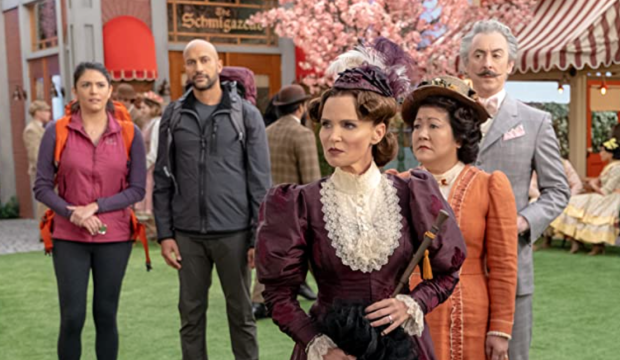 Chenoweth (a recent Critics Choice nominee for her role of the pious Mildred Layton) says pointedly of the series: “We needed it.” The actors came on board while the global pandemic was still raging, which heightened their appreciation of the material since these triple-threats had no stage on which they could perform. “It came out at a time when you couldn’t go see musical theatre,” notes Krakowski, who was involved in early readings of the project and “just fell so in love with it.”

“Love” is the word most uttered by this cast, whether it’s directed towards the scripts or each other. Cameron reveals that the strong affection was likely born out of spending the filming period in one hotel together. “It was really sweet,” states Cameron of the shared space, “It became very communal because we were in this Covid bubble.” As Cameron adopts a pitch perfect Chenoweth impression to recount stories of late night sleepovers and neighborly gift-giving, it’s clear just how much this ensemble bonded during filming. “It’s so easy to be in love with everybody,” explains Harada, “We all love the same thing. We are all there for the same reason: we wanted to be a part of this homage to what we love.”

The cast appreciated that director Barry Sonnnenfield was determined to film and present the musical numbers as theatrically as possible. “They took a concerted effort to show the dances from head to toe,” reveals Krakowski. Shooting an entire song from start to finish is a rarity for on-screen musicals Cumming believes that this lack of cuts harkened back to the way golden age tuners were filmed and “really helped with the homage.” This tactic certainly helped make numbers like Chenoweth’s one-take “Tribulation!” (a nod to “The Music Man”) feel extra special. Harada elaborates that one of Sonnenfield’s is “creating these slightly off-kilter worlds, that you believe.” The marriage of this director’s aesthetic with the charming musical script was a match made in heaven as far as the cast is concerned, and allowed them to give their best work as a true ensemble. “The heart of the piece jumps right off the page,” claims Key.