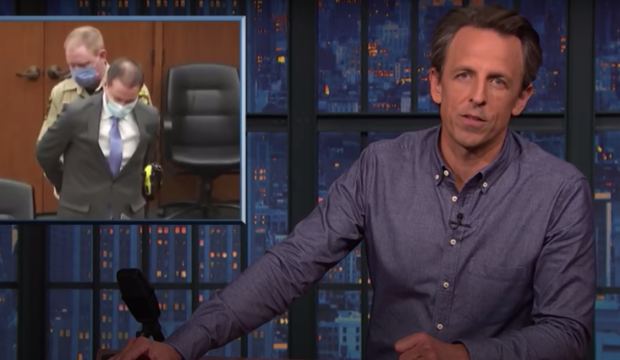 On Wednesday’s “Late Night,” Seth Meyers talked about Tuesday’s guilty verdict for former Minneapolis police officer Derek Chauvin, who was convicted of murdering George Floyd, an act that set off Black Lives Matter protests across the country last year. The host focused especially on Floyd’s lawyers telling the jurors that they can believe their own eyes, and what they saw on the video of Chauvin kneeling on Floyd’s neck was the homicide it appeared to be.

“It was a simple yet powerful statement that applies to so much about how our racist system of policing and oppression is built,” Meyers said. “We can see the injustice with our own eyes, but there’s a whole industry of people, from police unions, to private prisons, to cable pundits, whose very lucrative job is to try to convince us that what we can see and hear with our own eyes and ears is not real. In fact, it’s worth going back and reading the initial police description of Floyd’s murder before the video came out to see just how deeply detached from reality it was. Here’s the official headline: ‘Man dies after medical incident during police interaction.’ It’s shocking. It’s hard to fathom. It’s like writing a book report about ‘Lord of the Flies’ called, ‘Kids successfully cooperate during tropical vacation, remain lifelong friends.’”

Meyers quoted journalist Yamiche Alcindor, who said that Black Americans so often see things like the Chauvin case that seem like obvious open-and-shut decisions, and yet so often end with more injustice. “On top of everything else, it makes you feel crazy to see something so obvious with your own eyes, and then have the system tell you that what you saw didn’t happen.” He compared it to a hypothetical situation of going to Costco to buy an 80-pack of toilet paper and being told the package you’re looking at isn’t toilet paper at all, it’s printer paper.

Meyers went on to say that it was “at the very least a relief to have what we saw with our own eyes confirmed by a court of law, even if it’s still a sorrow moment for grief and mourning because this one verdict alone does not mean justice is done.”

“True justice would mean George Floyd would still be alive today,” Meyers continued. “True justice would mean Black people no longer having to live in fear of being killed by police. But there was at least accountability, which is hopefully a comfort to George Floyd’s family, and all those mourning his death, and a first step toward true justice and the reform we so desperately need, because it is undeniably the case that this is not the end of the story. As we’ve explained on this show many times before, the culture and system of policing in this country must be dismantled and reformed.”

Meyers noted that the NYPD, for example, gets more funding than five social service departments combined. And they’re spending that money by solving fewer crimes and sending $74,000 creepy robot dogs into public housing buildings. The whole system needs to change in order for justice to truly be served.