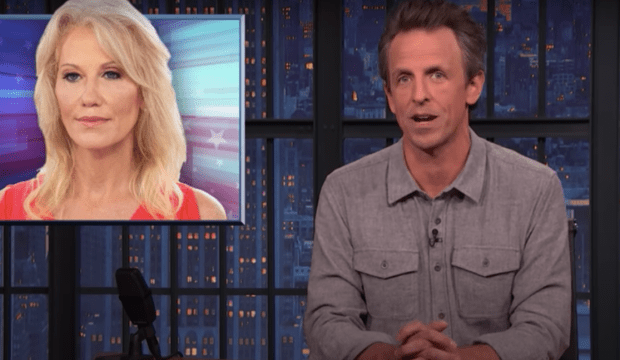 Seth Meyers devoted Wednesday’s “A Closer Look” segment on “Late Night” to the many confirmed liars from Donald Trump’s White House who keep popping back up on TV to spout nonsense. And there’s one person in particular who Meyers is not stoked to hear from again.

“Probably the person I miss the least is Kellyanne Conway, whose shamelessness really knew no bounds,” Meyers said. “She was somehow the Trump administration’s most prolific and also worst liar. She wasn’t even smooth about it.” He said she lied the way kids lie, taking it too far past the point of believability.

Meyers said that the quote that should follow Trump’s advisor for the rest of her career was when in March 2020 she said, “in the most condescending way possible,” that the pandemic was “being contained.”

“She always sounds like she’s trying to argue that her coupon is still valid at Talbots,” Meyers joked. “‘It’s valid. Do you not think it’s valid?’”

“But credit where credit is due, it was contained,” Meyers continued. “The coronavirus went away and everything went back to normal. I kept doing the show in a suit and tie in front of a live studio audience without interruption and I stopped having that weird, recurring nightmare that I was trapped in a room with a sea captain painting who loved corny jokes and sounded suspiciously like Will Forte.”

Despite Conway’s demonstrated flexibility with truth and facts, Fox News had her on again, this time to lie about supply chain issues, which she blamed on Joe Biden, because according to her there were no supply chain issues when Donald Trump was president.

“Oh really? Because I seem to remember a time when a roll of toilet paper had a street value just above cocaine,” Meyers said. He admitted that was due to panic-buying, not the manufacturing and shipping issues that are happening now, but still, it’s dishonest to say the supply chain only broke down because there’s a Democrat in the White House.

“I mean, I know the last 20 months have been kind of a haze, but did they really expect us all to forget the long lines of food and empty store shelves and desperate search for Lysol and Purell?” Meyers said. “Do they think we’ve forgotten the days of watching ‘Tiger King’ and trying to make our own hand sanitizer out of vodka and grape jelly?”