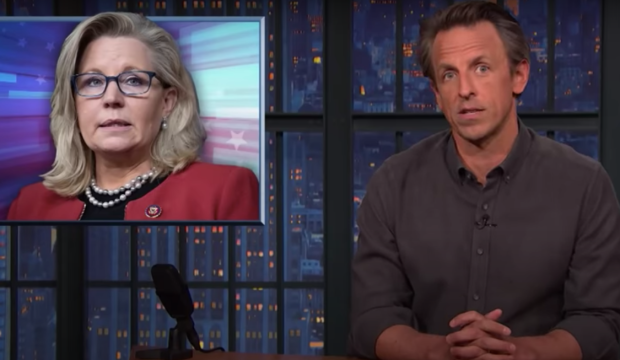 On Thursday’s “Late Night,” Seth Meyers was feeling conflicted about supporting Liz Cheney, the Republican congresswoman from Wyoming who is being ousted from her leadership position in the House for breaking rank and continuing to denounce former president Donald Trump for his false claims of voter fraud and Trump’s role in the January 6 Capitol riot. Meyers doesn’t like Liz Cheney, but he doesn’t like what the GOP is doing to her, either.

“She’s a pro-war torture apologist who supported Trump in 2016 and helped make the modern G.O.P. what it is today. I mean, I feel like B.J. Hunnicutt speaking up in support of Charles Winchester,” Meyers said. (Ask your parents if you need that “M*A*S*H*” reference explained).

“But she’s not being punished for any of that,” Meyers continued. “She’s being punished for simply stating reality. The G.O.P.’s fealty to a corrupt and deeply unpopular ex-president who never won the popular vote, never cracked 50 percent job approval, and who fomented a violent insurrection to overturn the election shows you just how deep their contempt for democracy is. Rather than actually appeal to a majority of voters, they’d rather just rig the game so they always win.” He added that that’s what the party is doing with the voter suppression laws like the one Florida governor Ron DeSantis signed live on Fox News on Thursday.

“Well, I’m sure it’s bipartisan if they’re signing it exclusively on Fox News,” Meyers said. “It’s like your spouse saying they want to tell you, and they want to do it live on ‘Maury.’” He said it was very bizarre to watch the business of government turned into right-wing cable entertainment.

The whole thing – the punishment of dissenters, the rigging of the game with disenfranchisement – it’s all part of the way Trump has remade the Republican Party in his own image. “The G.O.P. has attempted to rebrand itself as a populist pro-workers party, but it’s all a giant fraud,” Meyers said. “All they really care about is dismantling democracy and purging anyone who disagrees with the unhinged lie that Donald Trump actually won the 2020 election.”