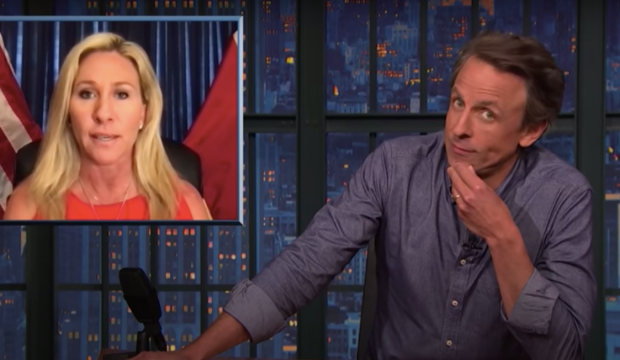 House Republicans are mad that they still have to wear masks on the floor of the chamber, and they are expressing that anger by saying really outrageous stuff. A lot of Republicans have made dumb comments, Seth Meyers said on Monday’s “Late Night,” but the worst take by far came from Marjorie Taylor Greene. As Meyers joked, the Republican congressperson from Georgia — who has a history of making inflammatory comments about Jews and Muslims — has an opinion that “sounds like it is coming from someone being dragged backward out of a Costco grabbing at the DVD rack.”

Greene said Speaker of the House Nancy Pelosi was “mentally ill” and used what Meyers called “an absolutely insane and grotesque analogy” when talking about the mask mandate during a recent podcast appearance. Greene compared wearing face coverings to the Holocaust, equating being forced to don a mask with being forced to wear a gold star. She described Jews being sent to concentration camps to be gassed and said, “This is exactly the kind of abuse Nancy Pelosi is talking about.”

“She’s mentally ill?” Meyers said in response to Greene. “You just compared having to wear a mask to prevent transmission of a highly contagious respiratory illness to the Holocaust. I’d say you should be wearing a straitjacket, but with you I’m guessing a normal jacket put on backward would probably do the trick. ‘How do I get out of this? The antifa Democrats have trapped me in a windbreaker! This is just like Nazi Germany.’”

“I mean, holy sh–,” Meyers continued. “As a general rule – and this goes for everyone – don’t compare anything to the Holocaust ever. Especially if you’re the lady who famously said wildfires are caused by Jewish space lasers. Who knows, maybe that will be her excuse. ‘I want to apologize for my comments comparing masks to the Holocaust. I don’t know what got into me, but I expect it was a ray beam from a Jewish space laser! Do not wrestle the mic away from me, I am making a very good point!’”