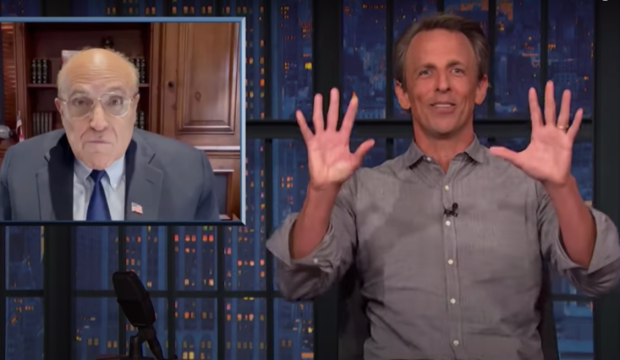 On Wednesday’s “Late Night,” Seth Meyers explored the plight of Rudy Giuliani, the “weirdo” who has been resolute in his loyalty to former President Donald Trump at great and unnecessary personal cost. Trump reportedly won’t help Giuliani with his legal bills, which the former mayor racked up while working as Trump’s personal lawyer (his law license is currently suspended). So Giuliani has resorted to Cameo, the service where people can order personalized video messages from celebrities.

Meyers almost felt bad for the former New York City mayor. “He has no idea what he’s in for. Right now, a prosecutor in the Southern District of New York is logging on to Cameo and asking Rudy to share the story of the time he went to Ukraine to dig up dirt on a political opponent to interfere in a presidential election.” He slipped into a lisping Giuliani impression: “‘This message is for Mr. DOJ. I hear you’re feeling discouraged at work. Well, let me tell you about the time my friend Don and I cooked up a scheme to extort a foreign government and got away with it. You know, it says here you want me to read you my text messages and your emails. Oh, hold on, someone’s banging at the door. Why are you yelling ‘police?’ There’s no police in here!’”

“Rudy’s charging $275 per video, but if you just wait awhile, you know he’ll eventually butt-dial you for free,” Meyers cracked. “I mean, this guy — this guy, he was a personal lawyer to the president of the United States, and now, he’s basically panhandling in the same place you can get a ‘Happy bat mitzvah’ message from Jamie Farr.”

Meyers observed that it’s not a surprise Trump won’t help Giuliani with his legal bills, because Trump is only attracted to people who project strength and confidence. “Meanwhile, if Rudy had his own cologne, it would be called ‘Flop Sweat,’” he said. “Trump would never help someone like that.”

'The Masked Singer': Top 13 most famous celebrities of all time include Rudy Giuliani, Kermit the Frog…

Rudy Giuliani ('The Masked Singer' Jack in the Box) unmasked interview: 'I couldn't think of anything…