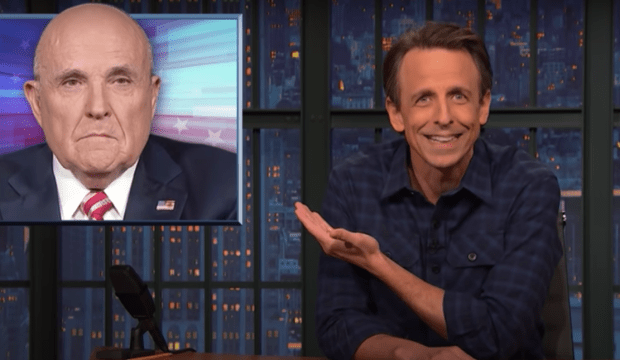 Donald Trump’s second impeachment trial is on the horizon, with a start date scheduled for February 9. But for the former president, there is one problem when it comes to his legal defense, as Seth Meyers pointed out during Monday’s episode of “Late Night.”

“Of course, Trump has had a little trouble assembling a defense team for his impeachment because his usual lawyer is busy getting sued for over a billion dollars,” Meyers explained, referencing Trump’s personal attorney, former New York City Mayor Rudolph Giuliani.

On Monday, Dominion Voting Systems filed a $1.3 billion defamation suit against Giuliani. The electronic voting products company is seeking damages for Giuliani’s “viral disinformation campaign” falsely claiming that Dominion was involved in a conspiracy to steal votes from Trump. In a statement to the New York Times, Giuliani brushed off the claims and the dollar amount.

“Dominion’s defamation lawsuit for $1.3B will allow me to investigate their history, finances, and practices fully and completely,” Giuliani said. “The amount being asked for is, quite obviously, intended to frighten people of faint heart. It is another act of intimidation by the hate-filled left-wing to wipe out and censor the exercise of free speech, as well as the ability of lawyers to defend their clients vigorously. As such, we will investigate a countersuit against them for violating these Constitutional rights.”

Still, despite Giuliani’s comments, Meyers appreciated the specificity of the numerical value in Dominion’s suit. “It’s funny, if you sue someone for a billion dollars, it sounds like a joke,” Meyers said. “But when you sue them for a billion three, you start to think, ‘Oh, they might have some evidence.’”

Meyers joked that “it’s a good thing vampires are immortal” because Giuliani will “have to work the rest of his life to pay that off. I mean…this poor man doesn’t have any money. Remember how he couldn’t even afford hair dye and just rubbed a typewriter ribbon on his head?”

'The Masked Singer' teases upcoming bombshell moment: '[Someone] just walked off the stage'…