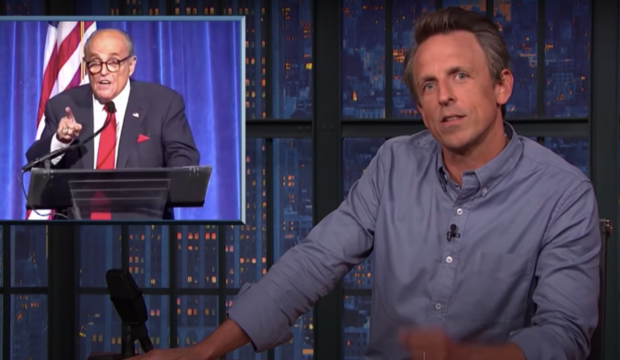 Twenty years ago, Rudy Giuliani was “America’s Mayor,” a beloved figure who led New York City after 9/11. But now, he’s known as a disgraced lawyer and unwitting “Borat” punchline whose recent bizarre appearance at a September 11 memorial dinner went viral over the weekend. During the event, a rambling Giuliani, apropos of nothing, even denied spending time with Jeffrey Epstein-connected British royal family member, Prince Andrew, which no one asked about. He’s not doing so well.

“In 2001, he was front row at Yankees playoffs games, and now I’m pretty sure he sells off-brand merchandise on the sidewalk outside the stadium,” Meyers joked.

Then on Saturday, “during an appearance at what has traditionally been a somber event,” Giuliani went on an “incoherent rant” where he did an impression of Queen Elizabeth and made an unprompted denial that he ever hung out with Prince Andrew and young girls.

“I’m not saying Rudy was drunk,” Meyers said after rolling some choice clips from Giuliani’s speech. “But that’s usually when guys from Brooklyn start trying to imitate the Queen of England.”

Meyers joked that Giuliani can add his Queen Elizabeth impression to his reel if he ever auditions for “America’s Not Talent,” and then played a compilation of bizarre televised impressions Giuliani has done over the years, which include Mitt Romney and Robert Mueller and all “sound like a cartoon dog.”

“He sounds like McGruff the Crime Dog blitzed out of his mind on some coke he confiscated from a bust,” he said.

During his speech, Giuliani wanted everyone to know he wasn’t drunk. “And he let everyone know in a way that’s very uncharacteristic for drunk guys, giving a series of long, rambling answers in which he repeated himself and made no sense,” Meyers said. He then proceeded to do a drunk Giuliani impression while he read the transcript of an interview Giuliani gave to the Daily Mail. “Yes I had a Scotch. But I was not drunk. There is a deliberate attempt [by] the left-wing to paint me that way,” Giuliani told the told Daily Mail. He did not, however, do an impression of the Queen.

'The Masked Singer': Top 13 most famous celebrities of all time include Rudy Giuliani, Kermit the Frog…

Rudy Giuliani ('The Masked Singer' Jack in the Box) unmasked interview: 'I couldn't think of anything…