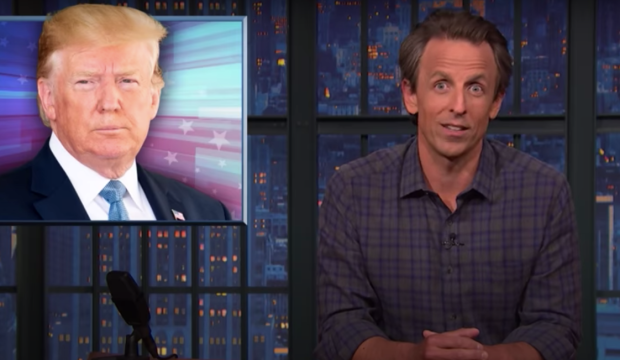 The Manhattan district attorney’s office, which is investigating former President Donald Trump’s business dealings for potential criminal activity, has convened a special grand jury to decide whether to indict Trump. “Late Night” host Seth Meyers noted that for Trump’s entire presidency there was a “thin veneer of crime” over everything he did. “You wouldn’t have been surprised to see a lower third on CNN that read ‘Trump meets with Polish president who claims his wallet is missing.’”

Meyers was surprised it took two years for the case to reach this point. “Trump has arguably confessed to multiple crimes in public, incited a violent insurrection, been impeached twice, was an unindicted co-conspirator in a hush money case, paid just $750 in federal income taxes while he was president, and did everything possible to hide his taxes from public view,” Meyers said. “At this point, I wouldn’t be shocked if it turned out he tried to claim a deduction for a bribe.”

Still, Trump has always managed to avoid consequences, despite numerous people involved in his campaign and administration being convicted of crimes. There’s a strong possibility nothing will come of the two criminal investigations into Trump that are currently happening. Meyers said he wasn’t going to get his hopes up. “Trump always manages to wriggle out of a jam. He’s like the David Blaine of crime. If he ever goes to trial, he’ll just regurgitate a frog that has ‘not guilty’ written on its back. If the feds come for him, he’ll hide out in a glass box over the Thames.”

One of the crimes the Trump Organization is being investigated for is “unscrupulous asset valuation,” which is claiming an artificially low valuation on real estate properties in an attempt to defraud banks and insurance companies. “In addition to being a potential crime, ‘unscrupulous asset evaluation’ sounds like something Trump would put under ‘interests’ on his Tinder bio,” Meyers joked.

Meyers said he found it really funny that if Trump had just stayed “a rich guy from TV,” no one would have cared about his alleged financial misdeeds, none of these investigations would have happened, and he would have gotten away with everything. “But Trump had to go and run for president like a moron and attract the attention of prosecutors, scrutinizing every aspect of his life and business,” Meyers said. “Which is not a good idea when you’re famously a corrupt real estate mogul and reality show host surrounded by shady characters. Like, I don’t want to make any assumptions, but if Mystery the pick-up artist ran for president I’m pretty sure they’d find some weird stuff in his tax returns, too.”