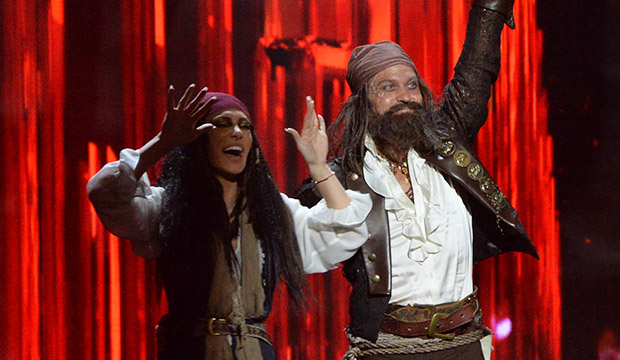 Sharna Burgess and Brian Austin Green want to clear the air about their abrupt exit from “Dancing with the Stars” and their subsequent lack of interviews about it.

During the chaos and confusing voting of “Dancing with the Stars'” double elimination on Tuesday, the real-life couple received the lowest combined total of scores and votes, and were quickly eliminated and dismissed from the ballroom before the second elimination. Normally, the “Dancing” couples, including the axed pairs, do post-show interviews — now via Zoom in the COVID era — but Green and Burgess didn’t do any on Tuesday night, leading many to speculate that they were pissed about their elimination and had stormed out. However, the couple said that was not the case in a series of Instagram Stories on Burgess’ account Wednesday.

“I just wanted to clear something up real quick because I think this is said in a couple of press releases. We didn’t leave before press started. We did wait a good 30 minutes on the Zoom link greenroom waiting for everyone to do press,” Burgess explained while in a car with Green behind the wheel. “But nothing came through to us. Apparently there was a big mix-up with the Zoom links last night. And then we had to go to the people that were getting us out of our wigs and all of the crazy makeup. There were people waiting for us to do that.”

“So we weren’t, like, salty and just wanting to f—ing storm out of there,” Green interjected.

“No one is salty,” Burgess added. “Everyone in the competition is absolutely amazing and we are deeply grateful for our time on it.”

SEE Confused by ‘Dancing with the Stars” judges’ vote? The ‘tiebreaker’ rule, explained

Green and Burgess, who’ve been dating for nearly a year, had the lowest score on both nights of Disney Week, earning a 25 for their “Snow White and the Seven Dwarfs”-themed waltz on Monday and a 27 for their paso doble to “Pirates of the Caribbean” on Tuesday. During their four weeks on the show, the judges often criticized them for being too focused on each other in their routines. Last week, Burgess said that their real-life romance was a “disadvantage” because of different expectations of an actual couple versus that of a dancing couple.

But the two have nothing but love for their time on “Dancing.” “Thank you so much to everybody, that, like, supported us and voted for us and was there for us,” Green said Wednesday. “It was really a great experience for us, not just with the people we met, but with the fans that supported us, and just getting to dance with each other.”

“It’s all love and it is all good. And we did not skip out on press,” Burgess reiterated, adding that they might do an Instagram Live later in the week to discuss their “Dancing” experience. “For now, we’re gonna enjoy each other today and enjoy not having anything to do other than that.”