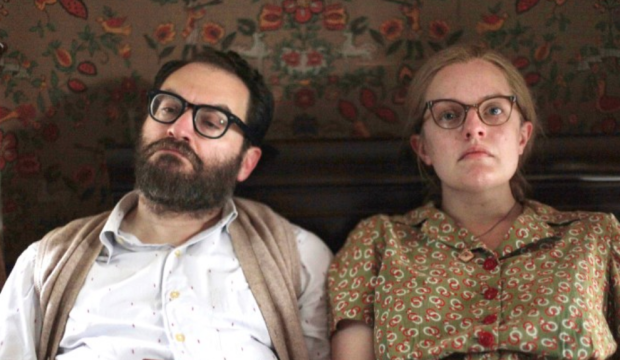 If you watch TV series from the 1950s, it appears that being a wife and mother was something just short of perfection. Just look at our favorite sitcom moms of the era-June Cleaver, Harriet Nelson and Donna Stone. They were always happy and peppy. They even wore pearls as they were vacuuming the living room or scrubbing the tub. But a lot of women of the era lived lives of quiet desperation. They may have had a college degree but wasn’t able to pursue a career because it got in the way of being a housewife and mom.

Influential writer Shirley Jackson was one such woman.  The acclaimed writer of horror and the supernatural including the brilliant short story “The Lottery” and the best-selling novel “The Haunting of Hill House” was also expected by her husband literary critic and Bennington College professor Stanley Hyman to take care of their four children and run the house. She struggled most of her life (she died of heart failure in 1965) to be taken seriously. The New Yorker wrote that even when she met Hyman in college, she was already beginning to experience “the anxiety, depression and ‘fears of people’ that plagued her throughout her life. Hyman seemed a savior: a brilliant man who didn’t think she was ugly, who understood her and loved her, who believed in her promise as a writer.” Still, he was a womanizer who would tell Jackson about his sexual adventures and would be known to yell at his wife to refill his pen ink.

The award-winning historical drama “Shirley,” which was released last June in theaters and digitally by Neon, is largely a fictional story about Jackson and Hyman based on the novel of the same named by Susan Scarf Merrell. “Shirley” looks at the lives of Jackson (Elisabeth Moss) and Hyman (Michael Stuhlbarg) through the eyes of a young couple Fred (Logan Lerman) and Rose (Odessa Young) who arrive at Bennington College where Fred has been hired as a lecturer. Fred and Rose are fictional characters; Jackson and Hyman’s children are missing from the narrative.

Adapted by Sarah Gubbins and directed by Josephine Decker, who won the U.S. Special Grand Jury Award for auteur filmmaker, “Shirley” earned good reviews especially for Moss’ nuanced performance as the horror writer. The New York Times’ A.O. Scott observed: “Moss, brazen and witty and seeming to push herself to the very edge of control, is a galvanizing presence, convincingly wild even as she’s trapped in a hothouse of sometimes dubious ideas.”

“Shirley,” said Decker, was shot in 2018 in approximately 29 days in upstate New York close to the Vermont location of Bennington. “I think we all went on a field trip to Bennington College and ran into Michael, who was also taking a field trip during prep. So, we did our homework that way.” Despite the dark, emotional subject matter, she found it is a joy to work with her quartet of actors. “They brought so much magic and mystery and they’re experienced,” Decker said. “We had so much fun blocking the scenes. They’re just so insightful.” She didn’t know how hard it would be, though, to shoot a period film in the contemporary world. “Shoot anything outside and everywhere you point, you see 2018. I hadn’t realized how limiting that would feel. Luckily, Sarah wrote a screenplay that mostly is about like a claustrophobic interior house experience.”

Rehearsal was at a minimum, which suited Moss. “I think I’m most used to not doing a lot of rehearsal because that’s just the way my projects have gone more than anything else except the few times, I’ve done theater,” Moss said. And she prefers it that way. “I tend to have trouble doing something and then doing it again. I always try to do something different, every take.”

Jackson and Hyman often come across a as a real-life George and Martha of Edward Albee’s “Who’s Afraid of Virginia Woolf?,” but Stuhlbarg believes the couple had an “extraordinary love. I think it’s a high-minded love. I think they connected probably with each other the first time they ever met each other and started yacking at each other and throwing curve balls at each other. They were both intellects. They were both writers. And I think each of them appreciated each other’s gifts because they were good at different things.”

Gubbins, who was also a producer on the film, agrees with Stuhlbarg. “I think there would never be another person for Shirley or Stanley thought could take the place of that intellectual approval. Stanley’s [infidelity] would never stray from his commitment to Shirley as a support of her talent.”